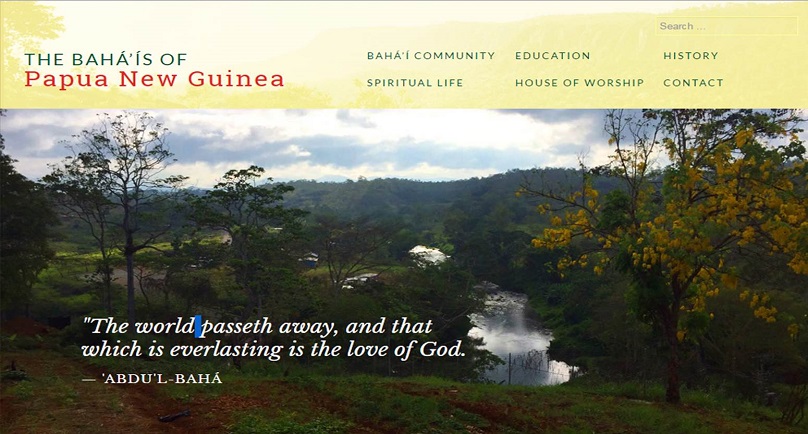 The National Spiritual Assembly of Bahai’s of Papua New Guinea have launched a new website.

Secretary of the NSA of Bahai’s Confucius Ikoirere, said the website represents the identity of the Bahai’s in Papua New Guinea, and the faith in general.

EMTV News was among a handful of guests who were privileged to have witnessed its launching at the Bahai’s headquarters in Port Moresby today.

The launching was preceded by a short devotion led by members of the Bahai’ faith.

“Essentially it tells the people about the faith, about who we are and what we do.”

It briefly explores the teachings and writings of the Bahai’s faith and presents experiences throughout the world, who inspired by the revelation of Baha’u’llah (founder of the faith) are striving to contribute to the transformation of their society, thus contributing to building an ever advancing civilisation.

The website, he said, was a significant milestone in the growth of Bahai faith in the country.

“The launching is another milestone in the growth of the faith in PNG since 1954 which has over 30,000 believers in all the regions of the country.”
Chairman of Bahai’s Spiritual Assembly, Erama Ugaia, was given the honor of officially launching the website at the click of a button.

The information on the website was categorised under five main themes for those interested in learning more about the faith: Insights of Bahai life; Spiritual life; Education; House of Worship and;History of the Faith in Papua New Guinea.

The Bahai Faith Ikoirere said, is one that is built on the principle of unity; a concept that is reflected in their house of worship, which is open to people of all religions to offer their traditional prayers.

The NSA Assembly announced that there were plans in the pipeline for one of these buildings be established in the near future at Tokarara.