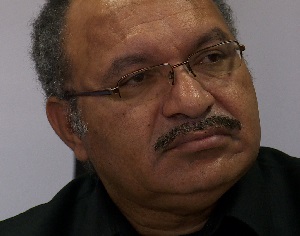 A slip rule application filed by Prime Minister, Peter O’Neill, to be heard today was adjourned to May 5.

A three-man bench comprising of Justice Derek Hartshorn, Justice Colin Makail, and Justice Don Sawong, will determine whether their Supreme Court decision made on April 5 was an error.

However, the Prime Minister was exempted, as there is still an interim injunction in place, in a proceeding that questioned the validity of his warrant of arrest obtained in June 2014.

Marape then started proceedings in the National Court in order for Paraka Lawyers to be taxed on the legal bills paid for services rendered to the state.

Both men’sought the order on the basis that the court – in the taxation proceeding – had not yet determined that the paymen’s to Paraka Lawyers were fraudulent, therefore they should not be arrested until this occurs.

When Justice Ere Kariko at the National Court refused the orders, Marape and O’Neill then appealed before the three-man bench.

However, Justice Hartshorn, Justice Makail and Justice Sawong refused the order stating that it does not deal with the substantive issues; therefore, the interim injunctions sought cannot be granted.

This means that the restraining orders sought do not prevent and interfere with the taxation proceeding.

The court ordered all parties to file all applications and proceed with the hearing of the slip rule application on May 5.

PNGDF Commits 2017 As Year Of Leadership