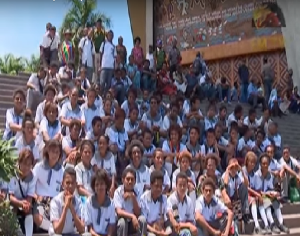 There are serious political enthusiasts amongst the crowd, and some are simply there to see politicians in the flash and in action. In most sessions there is a group of students who attend and yesterday was the 7D class of Wardstrip Primary School in Port Moresby.

I caught up with them after the question without notice session and spoke with their class leaders Ioire Moide and Faith Kants.

The excursion is part of their Social Science class on the government. Their teacher, Siambo Yangu, thought it would be more “practical” to bring them to the watch the real thing as they learn about the structure of PNG government.

For most of them, it’s their first time to witness how a question and answer session on the floor of parliament is conducted.

While the experience of being in the chambers was exciting, they were a little disappointed on how certain topics were handled by ministers concerned,

“I don’t think they argued too well,” Moide said.

The answer from Fisheries Minister, Mao Zeming, on illegal fishing that was brought up by Milne Bay Governor, Tit’s Philemon, drew some criticism.

Faith Kants, said “He didn’t go into the question, it’s like he is just picking up a bit but not really into it.”

While Moide said “He seemed to be covering up,…and didn’t [go] into answering the question.”

On the conduct of members of parliament during question and answer sessions, this was their analysis:

“To me it’seemed like little children arguing over things, tapping on desks,” Moide said.

The outspoken class leader Moide has this advice for our parliamentarians.

“As leaders they should do things in order and answer questions instead of barging in and tapping desks screaming at each other and all those because at this time, the country is watching them.”