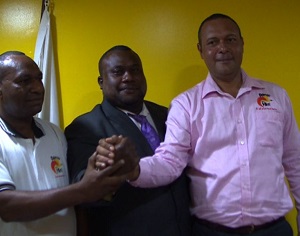 Pangu Party has announced its candidate for the Pomio By-elections.

Hailing from Kilalum village in Pomio, East New Britain province, Leo Katal brings with great wealth of experience in both the private and public sector.

The Pomio seat was left vacant following the convict and jailing of Paul Tiensten last year.

Pangu Pati executives led by party leader and Deputy Opposition Leader, Sam Basil, and General Secretary, Morris Tovebae, welcomed their candidate. Mr Basil was grateful as it was unusual for candidates to choose a party in the opposition.

Pangu Pati believes in their candidate to deliver in a remote isolated district. The 42 year old candidate says he chose Pangu Party as he believes in effective service delivery, such as demonstrated by the Party Leader.

Basil says all party members are expected to deliver. This is further enforced by an agreement which they all will sign to ensure effective performance of service delivery.

Meanwhile, the Papua New Guinea Electoral Commission says polling will run from 9 May to 22 May; with the return of writs on or before Friday, 11 June.

The Electoral Commission has allocated K3.6 million for the Pomio by election.

Minister Gets Tough on Fake Visas