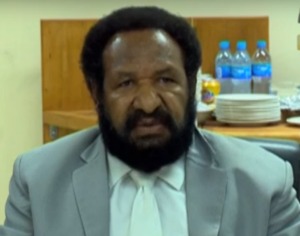 The opposition says there is no justification on the review of the Vote of No Confidence Motion.

In a news conference yesterday, members of the opposition said the review lacked facts and did not represent PNG’s democracy.

They expressed their concerns on the review conducted by the Permanent Parliamentary Committee on Private Business, on the Vote of No Confidence Motion.

Opposition Leader, Don Polye, maintains the motion was still effective because members, who have written to the Speaker to withdraw their signatures, should not have affected the requiremen’s.

“Naru didn’t sign, I accept that, Namah couldn’t because his child is sick and is overseas. That’s the reasons the Permanent Parliamentary Committee on Private Business used. To date Namah is still a member of parliament in the Opposition side,” he said.

Polye added that the opposition will file an application to the Supreme Court seeking clarification on this matter.

Mover of the Motion and Deputy Opposition Leader, Sam Basil, said irregularities claimed by the committee were irrelevant on the eligibility of Vanimo Green MP, Belden Namah, as a member of parliament.

“The Permanent Parliamentary Committee on Private Business is made up of the government bench only, chaired by the Acting Speaker and they lied.

“The chairman didn’t even have the courtesy to give me a copy of the reference, to this time, we have nothing,” Basil said.

The actions by the government side are treats to democracy, and these were concerns raised by Rabaul MP, Dr. Allan Marat.

“Notices of Motion of No Confidence must be tested on the floor of Parliament. If you have nothing to fear, allow it,” Marat said.

Oro Governor, Gary Juffa, said the Prime Minister and his government must not look for excuses to set up barriers to stop the motion.

“It’s not by by-partisan. It now questions if democracy because we have an acting speaker, who appears to be taking sides of the government,” he said.