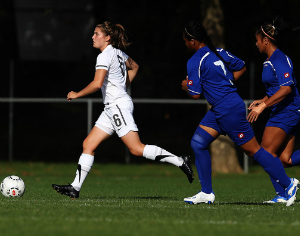 The victory for Samoa follows a 3-3 draw against Tonga in their first game on Saturday and lifts them to four competition points, one ahead of nearest chasers Vanuatu.

Samoa coach Leti Tamasese had viewed the game a dangerous one, given New Caledonia were coming off a record 26-0 defeat to New Zealand in their last game.

Samoa took only five minutes to start the scoring, however the goal came against the run of play as New Caledonia bossed possession in the early exchanges.

Three minutes later the lead was doubled after Shalom Fiso got one-on-one with the keeper and made no mistake from close range.

Despite the scoreboard, New Caledonia were right in the game and when awarded a free kick 25 yards out, defender Marie-Luce T’chacko stepped up to deliver a brilliant driven ball into the back of the net which halved the gap.

Once again though, Kamali Fitialeata’s side weren’t able to transform possession into goals, and on 23 minutes Fiso got in behind the line to slot her second and give Samoa a 3-1 lead.

Australia-based captain Matalena Daniells curled home a free kick from outside the box to net her side’s fourth goal until early in the second period New Caledonia did their best to pull back the 4-1 deficit.

However, errors at the other end hurt once again as Fiso exposed them for speed and secured her hat-trick on 51 minutes.

New Caledonia did eventually get one back, with Oniary scoring in the 82nd to bring the score back to a more respectable 6-2 at full time.

While pleased to see improvement from their last encounter, Fitialeata says he remains frustrated with the situation they find themselves in.

The second match of the afternoon saw New Zealand maintain their unbeaten record with an 18-0 victory over Vanuatu.

While the game was never in doubt and the score line hugely impressive once again, the performance wasn’t New Zealand’s best as they struggled to keep possession against an energetic Vanuatu.

For Vanuatu the loss delivered a crushing return to reality, after celebrating their first ever victory at an OFC U-20 Women’s Championship ealier and while coach Joel Rarua had anticipated a better outcome from the game, he conceded they were up against a much better side.

Conference Gathers Many To Assess State Of Family Planning