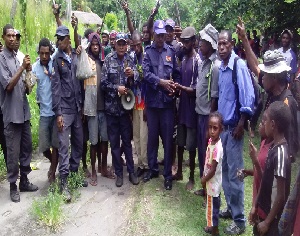 Provincial Police Commander for Northern Province, Lincoln Gerari, has vowed to bring closure to the pending criminal cases in the province.

Gerari said individuals and families deserve justice, and he is committed to ensuring this is served. Some of the criminal cases outstanding involve police officers that have never been heard in the court.

The courts will not spare police officers in the Northern Province involved in these alleged criminal offences.

Gerari, in his 2016 intent, called for strict adherence from his officers.

Since taking office last year he has noted that several police officers accused of committing series offences have been avoiding prosecution.

In order to restore public confidence in the police force, Gerari will crack down on rogue police officers.

He said justice must be served where it is due, as no one is above the law.

Gerari admits there are many cases involving police officers that have gone unheard. This has left many individuals and families wanting answers.

Though it may take time to bring closure to some of the cases, Gerari is committed to the cause. He plans to work closely with the provincial government and the courts to achieve this.

In the meantime, there is an ongoing police operation in the province to maintain law and order.

WHO: Investment In Water And Sanitation Projects Pays Off