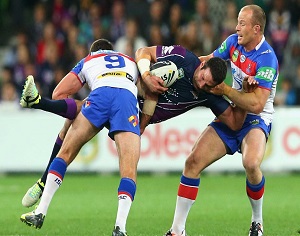 With only two points scored in the second half, the Knights did enough damage early on in the game to provide the biggest upset of Round 24.

The Knights travelled to Melbourne with nothing to lose, sitting at the bottom of the ladder and desperate to avoid the wooden spoon.

It took just four minutes for the Knights to get on the scoreboard through captain, Kurt Gidley, but Melbourne were determined to stay in the contest and Cameron Munster replied shortly after, bouncing off several defenders to score under the posts.

Newcastle edged ahead with a penalty goal, and thenextended their lead even further with two unanswered tries to Tariq Sims and Tyrone Roberts.

The Storm now sit in sixth spot on the NRL points ladder, and have two challenging matches ahead of them against the Cowboys and Broncos before the start of the finals series.