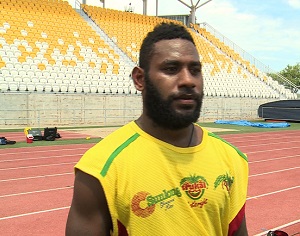 After being part of the PNG Hunters train on squad, it is believed that young Konnie Benard has left the hunters camp and returned to training with his Intercity Cup club the Rabaul Agmark Gurias.

Benard, who plays in the backs for the Gurias, was one of three players named as a development players vying to be named in the final squad for the PNG Hunters.

Although he is yet to confirm his reasons for leaving the Hunters camp, PNGRFL CEO Bob Cutmore confirmed that he wanted to go back to the Gurias where he was guaranteed to play, however he is very much still in the development squad.

The players in the Hunters train on squad are now hard at work, to impress coaches and managers to earn a spot in the final team for the 2016 season.

The Hunters first game will be against the 2015 champions, Townsville Blackhawks, on the first weekend of March.