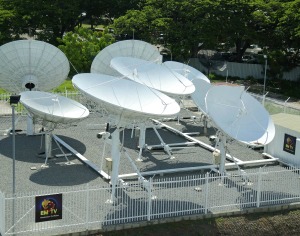 This is EMTV’s first step towards digital transmission, a step that will further enhance the quality and volume of content offered on your &lsquo”Nambawan to Watch”rsquo;.

The newly constructed infrastructure has the capability to downlink Cband as well as Ku-band services, and has the capacity to receive transmission of 400+ TV and radio services from around the globe.

EMTV has two dedicated links from the dish farm to its Boroko studio, ensuring that content is available 24/7, 365 days of the year.

The same infrastructure is being utilized to bring you programming from Australia’s Seven Network, with the first of these shows being the hugely successful breakfast show ‘Sunrise’ now airing from 5.30am each morning on EMTV.

EMTV CEO, Bhanu Sud, says the new dish farm marks the start of a number of exciting projects that lay ahead for the station.

“Transitioning from analogue to digital is a top priority for us, no doubt. However the new dish farm gives us the opportunity to not only continue to provide fantastic local content, but also enhance our ability to share further international content to ensure we provide the best free-to-air viewing option to the people of Papua New Guinea,” he said.

“We have the 2016 Rio Olympics this August, the FIFA U-20 Women’s World Cup in November, and agreemen’s in place with international networks allowing us to share new and exciting international content,” Mr Sud added.

All this looks set to see EMTV remain as the &lsquo”Nambawan to Watch”rsquo; throughout Papua New Guinea.