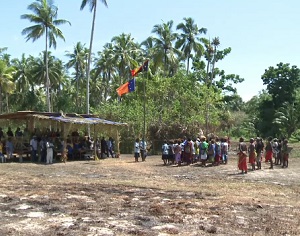 Following a national government committment, a new polytechnic and industrial training institute will be established in New Ireland Province.

This development comes under the national government’s commitment in the revised Simberi mining project Memorandum of Agreement.

The project will be implemented under the government’s Public Private Partnership concept, with government responsible for both construction and curriculum development prior to it being handed over to the church for day to day operations.

Land was made available to the state by the Kavieng Catholic Diocese for the construction of the institution, with work to be commenced shortly.

Bishop Ambrose Kiapsen of the Kavieng Catholic Diocese urged the community to take ownership of the service that’s to be delivered.

He said the future and wellbeing of the children from the province would be realised through this establishment.

This project is aimed at educating New Islanders with the necessary skills to work in the mining projects which are found in the province.

The institution will be built at Fissoa, in the Tikana local level government area.