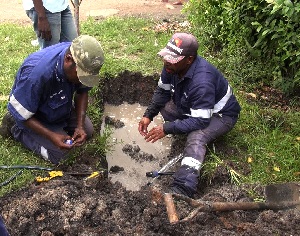 Over 2,000 residents in Port Moresby will be disconnected from water supply, as Eda Ranu begins its disconnection exercise.

The major disconnection exercise comes after residents fail to pay water bills despite being notified.

Majority of the residents disconnected today were illegal water users.

This morning Eda Ranu Technical team, with members of the police force, took on streets in Gerehu’s Stage 1 to disconnect water taps.

Paul Gore, who heads Eda Ranu’s Commercial Section says, not only residential areas are targeted but business houses and commercial industries as well. The disconnection exercise started on March 10, and will follow through to the next two months; this includes other parts of the city.

“It’s a regular exercise carried out by the company if users do not pay up”, Gore said.

Eda Ranu says once water bills are paid connections will be made.

Over a thousand notices were sent to residents, but only 300 of those made attempts to payup bills with almost 3,000 customers blacklisted as illegal water users.