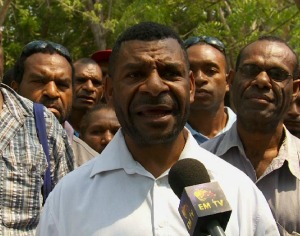 Deputy Chief Justice, Sir Gibbs Salika, when handing down the verdict brushed aside all three charges of official corruption leveled against him under section 92 of the National Criminal Code Act.

After a year of ongoing court battles between the accused, Timothy Tala verses the state, the Waigani National Court has reached its final verdict today.

Timothy Tala was the Chairman of the National Broadcasting Corporation Board during the time when he was arrested and charged by police in 2014, while conducting a board meeting asking for K20,000 for personal use and K1.5 million for the credit facility for the board.

He was allegedly charged under three counts of official corruption under section 92 of the criminal code act for:

The Waigani National Court ruling by Deputy Chief Justice, Sir Gibbs Salika, held that the K20,000 Mr. Tala mentioned for his personal use and the K1.5 million for the NBC Board facility was never mentioned in the context of a board meeting.

Legal Counsel for the Timothy Tala, Frederick Lunge, said the court acquitted Mr. Tala free of all these charges laid against him and ordered that Mr Tala would continue to serve as Board Chairman of NBC.