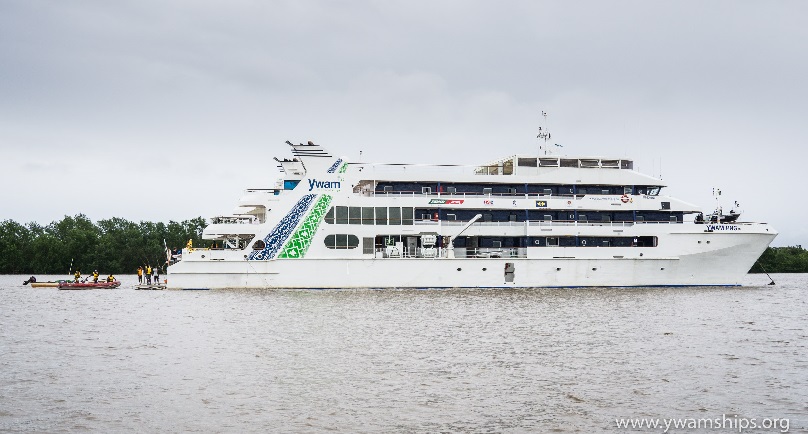 Over the space of 20 days, 2,788 people received health care and training, 24 health care workers were up-skilled and 36 villages were visited.

YWAM MSA’s Managing Director, Mr Ken Mulligan, said he was thrilled with the success of the first outreach.

“We have only just begun to see what’s possible with the MV YWAM PNG – we are looking forward to building the operating theatre, laboratory and outpatient facility that will enable us to do much more.”

“I’m very grateful for our supporters and all the volunteers that traveled from all over the world to help make this first voyage possible,” said Mr Mulligan.

A highlight from the outreach was working alongside the Middle Fly District Health Services (MFDHS) team in some of the most impoverished, isolated areas of the Western Province, the Bamu and Gama Rivers.

Together YWAM MSA and the MFDHS covered every village with immunisations, family planning and other maternal health services in the space of five days along the lower Bamu and Gama rivers.

Director of Nursing Services for MFDHS, Gordon Mase, said that YWAM MSA’s support in reaching their patrol targets has given them a huge boost.

“Villages along the Bamu and Gama Rivers are some of the most difficult places for us to reach – we haven’t be able to get there at all this year.”

“A patrol usually takes us 20 days to cover the region – together with YWAM we covered it all in five days.”

“We are grateful for YWAM MSA’s help in helping us overcome the geographical and logistical challenges we have in reaching our people,” said Mr Mase.

The MV YWAM PNG will be in Port Moresby until Sunday before it departs for the Central and Milne Bay provinces.

Bhosip Kaiwi Given 7 Days to Work on Submission