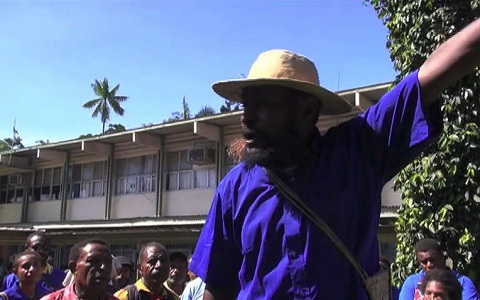 The Teacherswere told on Monday to come back yesterday. Bet,the Provincial Education Advisor, Murika Behoro saidthere was no money and treasury has closed.

&ldquoInthe morning Mr. Behoro came down and told usthere are no funds and treasury will be closed on Friday,” say a teacher, Sharon Tumunde.

Bet when teachers became persistent,they were told to come back at two o’clock.

The Education office has since closed andthe staff had gone to a hotel to discuss selections of grade eights inthe Province.

“We can’t followthem to Melo (Melanesian Hotel) and askthemthere, because its that unprofessional,” says anther teacher, Texen Liko.

Teachersfrom Port Moresby and forty-six from East Sepik have receivedtheir leave fares. thers are still waiting for an answer.

“Your money is inthe bank, butthe question is when,” he said.

This is not a one off situation for teachers in Morobe Province, but it is an on-going crisis.

Teacherswant to travel totheir home Provinces after teaching in Lae City. Some come from rural districts of Morobe Province, as far as Menyamya and Beana.