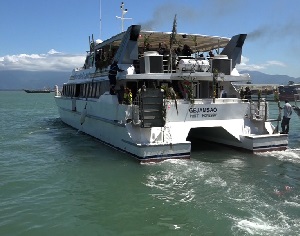 The Gejamsao made its first journey as part of a fleet owned by the Morobe Shipping Services after its parent company, Lutheran Shipping, was liquidated a year ago.

Speaker of parliament and Finschafen MP, Theo Zurenuoc, travelled on this first trip to Finschafen.

The Finschafen District spent K500,000 to buy the boat and then another half a million kina to repair it.

Over 12 months ago, the Lutheran Shipping company was liquated. The company crumbled due to poor management.

During the liquidation, five districts in Morobe bought some of the vessels and set up a new company, the Morobe Shipping Services.

The speaker has since called on Morobeans to travel on the vessel to make the shipping service viable again.