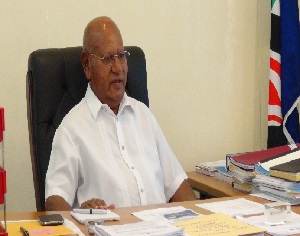 Momis called for the minister to lift the ban immediately, citing a lack of basis for the national government’s recent move, and urged Pato to resolve PNG’s dispute with Australia, separately.

The Bougainville leader said that the PNG government should remember that the Peace Agreement provides Bougainville with high autonomy, giving the ABG, control over the access of foreigners to the Autonomous Region of Bougainville.

The PNG and Australian governments have been urged to honour the Bougainville Peace Agreement and resolve their dispute.  Minister Pato imposed the ban in response to Australia’s plan to establish a diplomatic office in Bougainville.

According to the statement, as far as the Bougainville leader is concerned, there is no rationale behind the PNG Government’s decision to ban Australians from travelling to the region. And that the ban would cause problems for Bougainville.

Yesterday however, Rimbink Pato, PNG’s Minister for Foreign Affairs and Immigration, said the decision to restrict access for Australians had been well received by people in the Autonomous Region of Bougainville.

Pato stated that the ban was easing fears and concerns that have been raised on Bougainville since Australia’s plans were made public in the government’s budget announcement, last Tuesday.

In contrary to Pato’s statements, Momis called on the foreign minister to be mindful of Bougainville’s autonomy, seeking assurance from the minister to refrain from making unilateral decisions relating to the travel of foreign citizens to Bougainville, adding that such actions can only be taken at the request, or in agreement with the Autonomous Bougainville Government.

Momis reiterated that under the peace agreement, Bougainville has high autonomy, also guaranteed by the PNG Constitution giving the ABG full control of the access of foreigners to the region.  Therefore, the PNG government’s ban is a serious breach of the spirit of the Bougainville Peace Agreement.

As a matter of urgency, Grand Chief, Dr John Momis says that he would like to meet with the Prime Minister, Peter O’Neill and minister for foreign Affairs, to discuss this diplomatic issue.