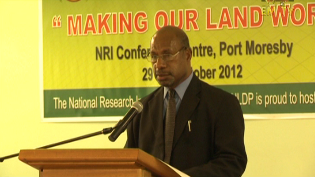 Minister for Lands and Physical Planning, Benny Allen under took to end irregularities in land processes.

Mr Allan made reference to the Special Agriculture Businesses Leases or SABLs at the centre of allegation of fraudulent deals.

He spoke at the National Land Development conference in Port Moresby yesterday.

The Minister for Lands and Physical Planning also pledged his support for the Housing and urbanization Ministry to address the housing problems in the country.

He wants to introduce a new land title law dealing with ownership.

Meanwhile, Prime Minister Peter O’Neill has written to his lands Minister expressing concern over the outcries of corrupt land dealings.

Under the review the Prime Minister has proposed auctioning State Land as an open and transparent process.

Tensions Ease in Pindiu After 8 Months of Fighting