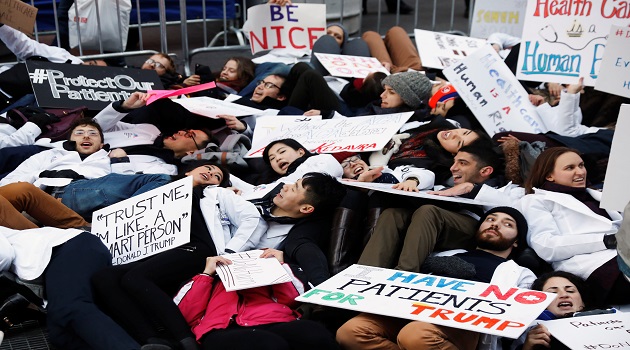 CHICAGO (Reuters) – Hundreds of medical students and faculty members gathered at Northwestern University’s school of medicine in Chicago on Monday to voice their opposition to the dismantling of Obamacare.

The demonstration was part of a larger White Coats for Coverage effort organized by medical students across the country and came a day before the annual deadline to enrol in the Affordable Care Act (ACA), former President Barack Obama’s healthcare law.

“The ACA is not perfect, but pulling the rug out from under the feet of our most vulnerable patients is not the answer,” Dr. Bruce Henshaw, a faculty member at Northwestern’s Feinberg School of Medicine, told the group of around 600 people.

“We will not stand idly by as our patients lose their rights. We will not stop today. We will write and call our representatives to ensure this doesn’t happen.”

Students organized the event. Northwestern University spokeswoman Marla Paul said the school had no official position on the issue.

“Proud to join my Yale colleagues to collectively say #protectourpatients. Improve the ACA, DON’T repeal it,” Ryan Murphy, who shared photos of a rally at Yale University, said on Twitter.

Republican Representative Tom Price, Trump’s nominee to lead the Department of Health and Human Services, has said an overhaul of Obamacare will initially focus on individual health plans sold through online exchanges and the Medicaid health insurance program for low-income Americans.

Trump has said he wants to keep some elements of the program, such as allowing young adults to be covered under their parents’ insurance. He favors plans that use health savings accounts and sale of insurance across state lines.

More than 8.8 million Americans were signed up for 2017 coverage under the ACA through HealthCare.gov as of Jan. 14, according to the site, up from around 8.7 million sign-ups as of Jan. 14 last year.

Arturo Salow, a second year student at Northwestern from Miami, Florida, urged people to sign up for ACA coverage before Tuesday’s deadline, saying more enrollees would make a rollback more challenging for Republicans.

“I’d advise any patient to sign up immediately,” Salow said. “If they are going to take away coverage, let’s make it as difficult as possible.”