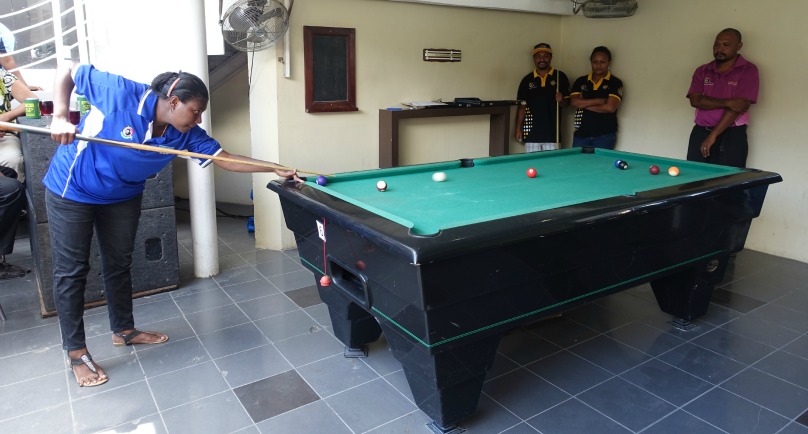 The Media Pool Competition will go into its first round of finals matches this Saturday at the Lamana Hotel in Port Moresby.

There will be no love lost as bitter rivals Heli Solutions Spin Doctors and Dataco Pebbles lock horns in one of two preliminary finals.

In the other top four clashes, minor premiers North East Mirror will face off against sister team Cool Grafix.

In the knock-out finals for the rest of the top 12 teams – Education Media should account for Vemps, DJAG and Pacific MMI will have an even tussle, Lamana will be made to work hard for their survival by Crime Stoppers, Halmar to starve off a strong challenge from Papuan Blacks, City Hall to be given a good knock around by Next of Kin, Poi Nangu and Keleone to go head to head, Niusmakers and Nichtosh clash in an arm wrestle and Auditor General do battle with Patrons.

The losers will shelve their cues until season 2016 while the winners live to fight another day.

The clash of the round though will be between defending champions Spinners, and hot favourites Pebbles.

Long held differences are sure to be spilled on the table as the silently sworn foes lock horns.

Pebbles on the other hand are peaking at the right time led by their no-nonsense skipper Billy George.

They have two of PNG’s most experienced pool players in champion Kelly Yambi and the evergreen Tom English to bring them home in such pressure games.

Media Pool Competition chairman, Tony Sipa, has extended an open invitation to all sponsors and supporters to go out and cheer for their respective teams.

Matches cue-off at the pool capital at 10am starting with the plate finals and the preliminary finals at 2pm.