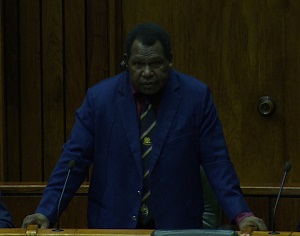 Gulf Governor, Havila Kavo, was physically present in Parliament yesterday after his long absence due to court matters relating to his status as provincial governor.

His return to the chamber brought a series of questions relating to the Gulf LNG Project development that transpired in recent times.

This included the change of the name from Gulf to Papua LNG.

“It was a National Executive Council decision, a policy no pipeline, by the provincial assembly last year, was to ensure all resources exploited and found be processed and exported directly from Gulf,” he said.

However Minister Duban responded, announcing the decision to change the name to Papua LNG was not a major issue.

The Minister explained that the new operator was a commercial decision based on factors of project economics.

He said based on research and analysis, Gulf has shallow waters that require long jetties and other major risks involved such as relocating communities.