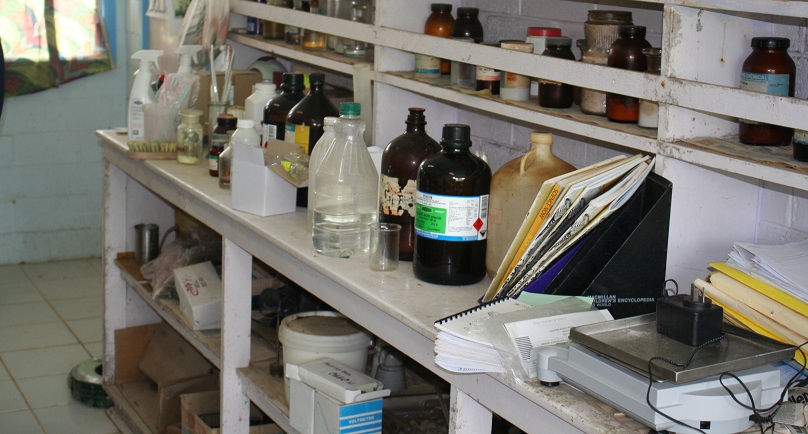 IMAGE: This picture shows a storeroom in the Mangai Secondary School Science Laboratories in New Ireland Province, with overdue chemicals not properly and safely stored away. This is a common scene for most high/secondary school science labs in the country.

An evaluation team has been established to evaluate the impact of the Secondary School Science Equipment Project on science teaching and learning in secondary schools.

Secretary for Education Dr. Michael F. Tapo made the announcement this week.

The committee has started conducting monitoring and evaluation of the project in selected provinces and schools in the country.

Information collected from each school will be reported to the National Government through the Department of Education, for decision makers to determine the impact of the project’s intended outcomes.

He said, “The annual National Grade T10 Examinations Mean Rating Index (MRI) for science from 2008 to 2012 and which may be the same for 2013 and 2014, showed that students’ performance were below the normal ratings compared to students in other countries. The results provided have shown that a majority (66.75%) of students performed way below the national average.

“There are continuing public concerns at the lack of science laboratories, equipment and materials to support science reformed curriculum in the country,” he said.

Dr. Tapo said differing views concerning the responsibility for building science laboratories and supplying equipment is a burden on the schools as this is a national issue challenging provincial governments at the administration level and planning to support science education.

“To address the issues, monitoring, evaluation and measurement of the impact of pieces of equipment to teacher learning and pupil learning is paramount. The National Executive Council approved the Secondary School Science Equipment Project in 2011,” he said.

The project has been implemented over the last three years beginning in 2011. Annually an average of K20 million is allocated to fund Secondary School Science Equipment Projects programs and is is funded under the Government of Papua New Guinea.

“All students who are in schools have a right to science literacy. Science and Mathematics skills co-exist and these assist a student to gain greater science and mathematics skills as they advance to higher grades,” Dr. Tapo said.