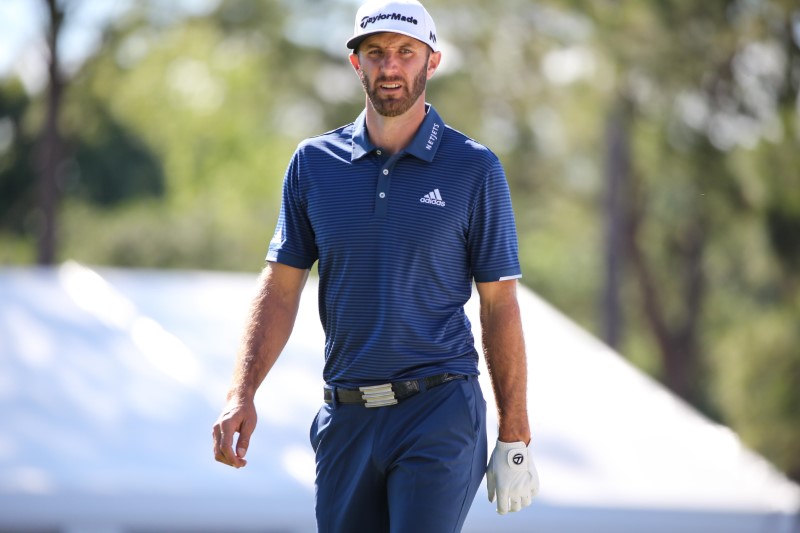 Image: May 7, 2017; Wilmington, NC, USA; Dustin Johnson walks onto the 18th green with a chance for the lead during the final round of the Wells Fargo Championship golf tournament at Eagle Point Golf Club. Mandatory Credit: Jim Dedmon

(Reuters) – Defending champion Jason Day plays with past champions Rickie Fowler and Henrik Stenson, while world number one Dustin Johnson tees it up with Rory McIlroy and Justin Thomas in Thursday’s opening round of The Players.

The Australian helps kick off the tournament in the morning wave on Thursday with fellow top 10 players, Sweden’s Stenson (7) and Rickie Fowler (9), teeing off at the 10th tee at 8:16 AM (1216 GMT) in the so-called ‘fourth major’ of the season.

Johnson, whose run of three victories in his previous three starts ended with a tie for second at last week’s Wells Fargo Championship, hopes to get started on a new winning streak when he tees off at 1:52 PM from the first tee in the afternoon wave.

World number two McIlroy, the FedExCup champion, celebrates a return to competition after a month off to get married.

They are preceded by groupings of Masters champion Sergio Garcia of Spain and former winners Adam Scott of Australia and Matt Kuchar, and an international trio of Briton Justin Rose, German Martin Kaymer and Spaniard Jon Rahm.

The elite field at The Players will see numerous changes at the permanent site of the championship, including a new drivable par-four 12th hole, where eagles are possible if one risks the danger posed by a water hazard left of the green.

There is also a new hazard between the sixth and seventh, and subtle changes to several holes, including expanded greens and the removal of rough to promote creative recovery shots.