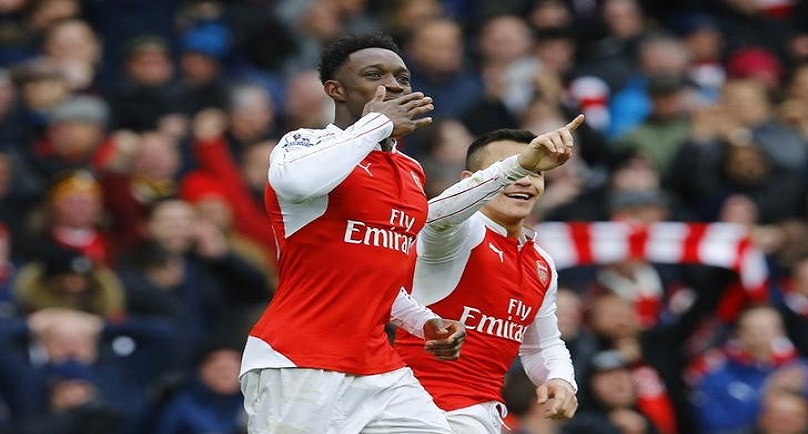 LONDON (Reuters) – Danny Welbeck came off the bench for his first game in 10 months to earn Arsenal the most dramatic of last-gasp comeback wins over Premier League leaders Leicester City at an ecstatic Emirates Stadium with his 95th-minute winner.

The England striker, sidelined since last April with knee injuries, could not have dreamed of a more extraordinary return, his glancing header from Mesut Ozil’s free kick deep into injury time earning them the 2-1 victory which narrows Leicester’s lead at the top to just two points.

It was a triumph which had looked hugely unlikely after Jamie Vardy had put Leicester ahead from the penalty spot just before halftime, a 19th goal of the season for the league’s leading marksman.

Yet the whole complexion of the game changed after the break when Leicester were forced to play the last 35 minutes with just 10 men after Danny Simpson had received two yellow cards for rash challenges in the space of five minutes.

After 15 minutes of incessant pressure, another substitute Theo Walcott almost inevitably smashed in the equaliser but Leicester still looked ready to celebrate a victory of sorts after they held out stoically and Arsenal wasted a series of chances until deep into injury time.

Then, after earning a free kick in Leicester’s half, Ozil, the league’s leading provider of goals, created havoc in the Leicester rearguard with a lovely floated free kick which saw Welbeck, who had been introduced with just over five minutes left, leap highest to provide the finest of touches.
It was Ozil’s 17th goal assist of the season.

For once in this campaign of fairytales for Leicester, there was a nightmarish ending as Arsenal’s home erupted in a crescendo of joy rarely heard at the ground as their heroes went on a lap of honour.

TITLE SPRINGBOARD
Sometimes sneered at as being the silent ‘Library’, here it was more like bedlam as Gunners’ fans began to believe it might just be the springboard for them to win their first title since 2004.

Welbeck, who had only had 45 minutes playing for the under 21s under his belt, was the toast of his team mates, who all chanted his name when they went back into the dressing room afterwards.

“It has been a roller-coaster for me, a difficult moment and my family and friends know what I have been through,” Welbeck told Sky Sport.

The defeat felt harsh on Leicester, who at halftime had been well worth their lead despite being starved of possession, playing on the counter with their now tried, trusted and simple approach based on dogged defence, excellent midfield organisation led by the exceptional N’Golo Kante and alacrity on the break.

Leicester’s goal just before halftime had Arsenal fans howling at a perceived injustice.

A Wes Morgan foul went unpunished, allowing the visitors a familiarly electric break which resulted in Nacho Monreal hanging his leg out and Vardy tumbling theatrically over it before picking himself up to smash home the resulting penalty.

The game completely changed once Simpson, booked minutes earlier for a foul on Sanchez, tugged Olivier Giroud’s shirt, a soft offence which still saw him given his matching orders by referee Martin Atkinson.

Leicester manager Claudio Ranieri felt it had been an unfair punishment.

Walcott was the beneficiary of a lovely nod down from Giroud as he levelled the scores after 70 minutes but Arsenal looked as if they would miss out on victory as Per Mertesacker, heading wide when it looked easier to score, spurned the best of their many chances before Welbeck’s late, late show.