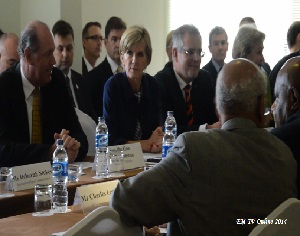 The business dialogue was delayed by several minutes as a result.

Ms Bishop was seen on the phone in an intense conversation, possibly in relation to the security threat that happened in Sydney this morning.

Inside, the discussions were held behind closed doors at the Airways Hotel, but the media was given a short time to film before the forum began.

According to the program, a PNG-Australia Business Dialogue was held in the morning followed by a meeting with PNG’s Minister for Religion, Youth and Community Development, Delilah Gore.

There were discussions over a possible establishment of a Pacific Leadership and Governance Precinct.

Other topics included foreign affairs and immigration policies and programs of interest to both countries. No doubt, national security was one of those issues.

It is not known at this stage, if the Australian ministerial delegation will continue its planned stay.

They are supposed to travel to the Autonomous Region of Bougainville tomorrow and meet ABG President, John Momis and visit the Panguna Peace-building Strategy Office.

Kimbe’s Opening Ceremony was an Eye Opener Despite Odds