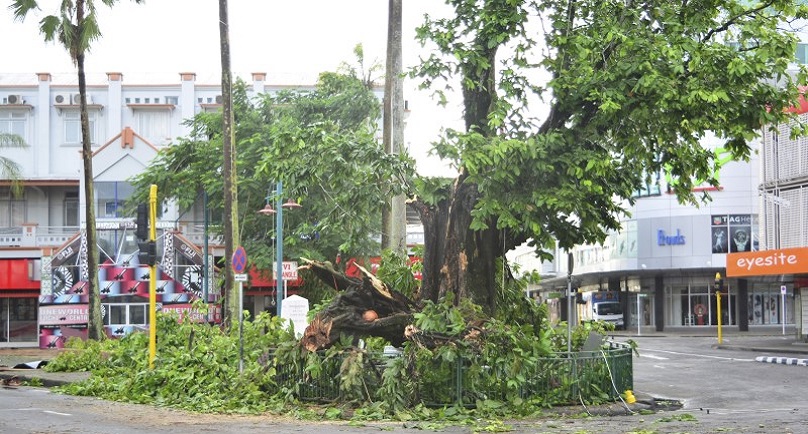 SYDNEY (Reuters) – Fiji began a massive cleanup on Monday after one of the most powerful storms recorded in the southern hemisphere tore through the Pacific island nation, flattening remote villages, cutting off communications and killing at least 10 people.

Aid agencies warned of a widespread health crisis, particularly in low-lying areas of the country where thousands of the country’s 900,000 people live in tin shacks, after crops were wiped out and fresh water supplies blocked.

Many people remained hunkered down in hundreds of evacuation centers across the country, where they had headed before  tropical cyclone Winston hit late Saturday, packing winds of up to 325 kph (200 mph).

“Many people have been left stunned and confused about what to do,” Prime Minister Frank Bainimarama said after declaring a 30-day state of emergency.

“This is a time of sorrow but it will also be a time of action … we will reclaim what we have lost.”
The 10 fatalities were all along the western coast and were caused mainly by flying debris and drowning in storm surges, the Fiji Broadcasting Corporation said, citing authorities. There were also fears for seven fishermen believed to be missing at sea.

A curfew in place for more than 36 hours was lifted early on Monday, allowing the Fijian military to ramp up efforts to reach the more remote parts of the archipelago of about 300 islands.

“The Fijians are desperately trying to repair severed lines of communication, but they hold grave fears that the news waiting for them will be dire,” said Oxfam Pacifical Director Raijeli Nicole.

“Given the intensity of the storm and the images we have seen so far, there are strong concerns that the death toll won’t stop climbing today and that hundreds of people will have seen their homes and livelihoods completely destroyed.”

Aerial footage of villages taken by the Royal New Zealand Air Force and posted on the Fijian government’s official website of the outlying islands showed whole villages flattened and flooded.

The Australian and New Zealand government authorized the release of emergency aid supplies held in the Fijian capital of Suva, which escaped the brunt of the Category 5 storm.
“These stores will ensure communities have access to safe drinking water and basic hygiene for those who have lost their houses or are displaced,” Australian Foreign Minister Julie Bishop said in a statement.

Bishop added that the high level of preparation by the Fijian government had helped keep the death toll low.

Virgin Australia said it would resume flights on Monday, while Jetstar said it was still assessing the situation.

Japan to cut emphasis on nuclear in next energy plan: sources