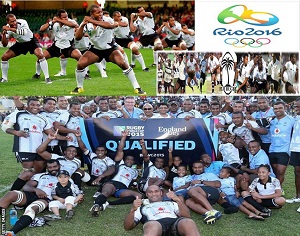 While the PNG Pukpuks missed out on a placing in the 2016 Rio Olympics, just across the ocean our Oceania brother’s the flying Fijians have already begun their road to Rio.

With a budget cut that saw Fiji Rugby Union receive of $2 million less than the $4 million that they requested, Fiji Rugby Union have embarked on a quest to raise funds to support the team’s campaign.

Ranked number one on the World Series standings, and with a record of 12 Hong Kong Sevens titles and two Rugby World Cup Sevens wins under their belt, the Vodafone Fiji Sevens team are a force to be reckoned with.

The campaign has a set target of $800,000, to support both the Fiji Sevens and female Fijiana team in their Rio Campaigns.

Regardless of the budget cut from the Fijian Government, Fiji’s standing in world rugby has continued to be a bonus for the island nation.

Last year Fijian President, Jioji Konousi Konrote, while addressing both teams, commended them for their efforts on and off-field as ambassadors of Fiji.

Come August 5, both the Fijiana’s and the Fiji Sevens teams will have the backing of an entire nation, and the region.