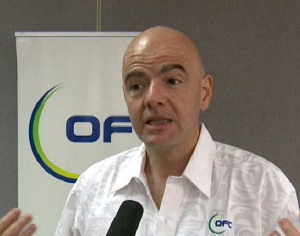 UEFA Secretary General, Gianni Infantino, flew in to Oceania to address the OFC Executive Committee during their meeting in Port Moresby today.

With the OFC Executive committee in the Nation’s capital to discuss the future of regional Football, the FIFA Presidential Candidate, hopes to garner support, as he presented his case to world football’s top post.

Infantino who has vast experience in working in the different levels of football in Europe, said the Oceania region has much to offer world football, and also vice versa.

And while he acknowledges that a lot more development programs and infrastructure upgrades still need to be done in the region, the world beckons, for pacific footballers.

His main purpose in the country, to offer support to Oceania’s 11 member associations, as he stands for election in February to the top post of Football.

In May 2015, FIFA was thrown in to turmoil amidst corruption charges of some of its most senior members, and most recently, FIFA President Sepp Blatter, and UEFA President Michel Platini, were both suspended for 90 days, pending an investigation over a separate matter altogether.

That has left the door open to the likes of Infantino, who believes, that change is needed.

Digicel Cup: A day of fans