FAO Needs to Step Up its Presence in the Pacific Region

Vanuatu Agriculture Minister, Matai Seremiah, expressed his disappointment on the issue of sub-regional FAO (Food and Agriculture Organization of the United Nations) offices in the region.

These sentiments were expressed after the ending of the Pacific Week of Agriculture that despite concluding well has failed to put some island nations at ease.

“… because the FAO subregional office for the Pacific region is in Samoa, and considering the population and landmass of the two Melanesian countries we thought it would be proper to have another sub-office base in PNG,” said Vanuatu Minister Seremiah.

Vanuatu had expected backing from Papua New Guinea in an effort to create a UN FAO office in country, which did not eventuate.

PNG Agriculture Vice Minister Koni Iguan expressed the same sentiments of the importance of having a subregional FAO office.

“PNG has an office but we do not have a representative of FAO within the office to oversee the programs. The Agriculture Department looks after the programs of FAO. Which is whatever we did, we then did a submission to the FAO office in Samoa,” said Iguan.

“Which is not right. If there is an FAO work effectively running in our country, we should have a representative of FAO within our country. Like have a secretariat office. They must function themselves as FAO. Then it can be easier and possible for us to access anything from the organization to help us,” he added.

However, he also said that the issue was raised for a split in each office in the pacific and the ministers agreed during the ministerial meeting that they must stand as one and be part of the FAO office in Samoa.

Vanuatu still stands on their position on subregions.

Vanuatu’s Agriculture Minister said, “That is the reason why Vanuatu didn’t comment, we just sat back and saw the communiqué passed but we still stand with our position.”

“…FAO needs to step up its presence in all our countries and I think the effective way of doing that is to create another subregion to look after Melanesia,” Vanuatu Minister Seremiah stated

Fiji will be hosting the 3rd Biennial Pacific Week of Agriculture in 2021. 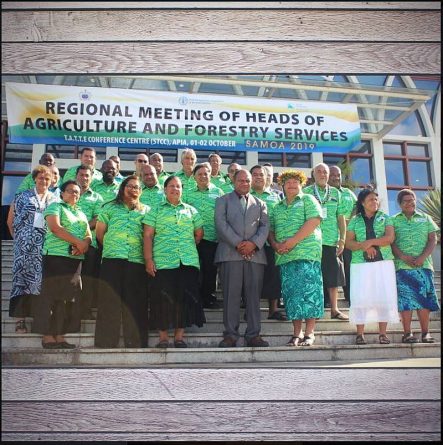 Lillian Keneqa is a participant at the ACIAR and ABC International Development ‘Celebrating Agriculture in the News’ Masterclass supported by Australian Aid.