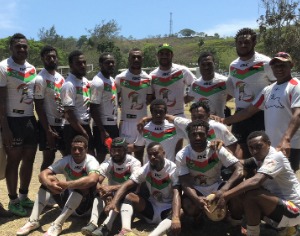 Koari Nagavas have been installed as favourites to win the Fairfax Nines rugby competition.

So far in the competition they have gone through undefeated and are well and truly the team to beat ahead of the finals.

With eight teams competing and just one round remaining, the heat is on in the Fairfax Nines Rugby Tournament as teams are vying to make it into the finals on Friday.

Boasting some of the best players from the PNG Hunters, in the likes Kato Ottio and Blen Abavu, Koari Nagavas has proven to be a force to be reckoned with.

Coming off a win yesterday, the Nagavas have secured a place in the cup play-off against SSG Roosters.

There will be selectors out there to scout new players for their franchise for the intercity rugby league competition, so there remains plenty to play for.