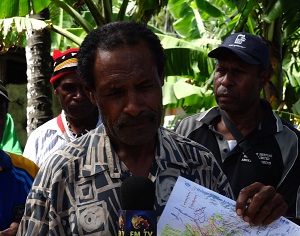 The Gulf provincial government and a landowner tribe have opposed the proposed plan to pipe Liquefied Natural Gas (LNG) from Elk Antelope into Central province.

On several occasions recently Gulf Governor, Havila Kavo, said they will not proceed with the idea but allow all processing and refinery to take place in Gulf province.

Today, Koriki tribe landowners of PRL 15 said they will boycott the project if the government and the developer, Total, push forward with the plan.

“We are saying no to pipeline coming to Port Moresby or Central.

“Everything should be done in Baimuru and Gulf province.

Recently, Governor Kavo said they want the processing plant and shipment facilities to be built in Gulf province.

Last week a group of Gulf leaders voiced their opposition to the ideas saying they are willing to boycott and shed blood over this unfavorable decision.

Meanwhile, the people claimed the National government and the developer are bypassing them in decision making.

“We are becoming strangers on decision making” another Koriki spokesman said.

Other eight major tribes in the area remain silent on the issue.

Morobe Mining Joint Venture donates to a School in Morobe