Usually the mushrooms we  get in Papua New Guinea are expensive and the technology behind  is a mystery to many. But in Goroka,  a provincial government project backed a  team of Chinese scientists  from the Fujian Agriculture and Forestry  University (FAFU) are teaching Eastern Highlanders how to grow their own mushrooms.

The mushroom production  is being managed together with a rice project.

One of the first  things you  see when you enter the small research compound  tucked away  in North Goroka,  is  the tall grass planted in rows.  The grass  variety of the  local pitpit but the stalks are thicker  and leaves are bigger.

The grass brought from Southern China is central to an interdependent agricultural system being adopted by farmers in the Eastern Highlands.

“The grass is suitable to grow here. You have a lot of local materials here and your climate it suitable for the grass to grow. The yield is very high and one hectare can produce 800 tons of fresh grass.”

The  primarily use of Lin grass  is in  the  creation  of growing material for a highland mushroom variety farmers have been cultivating in their villages.

Lin Yinxing,   an agronomist who first came to Papua New Guinea  in 1998 to work on mushroom research is the lead scientist. He  says it took a lot of experimentation and time to develop a suitable method of mushroom growing and the Eastern Highlands climate  is perfect.

When the grass grow to about 8 meters, they are harvested and  put out to dry in the  sun.  The stalks are then crushed and ground  into a pulp. This is what they use as a substrate – the dry material  from which the mushrooms grow.

This project has a 20  year history.  In 1998, the Eastern Highlands Provincial Government  signed a sister province cooperation agreement with the Fujian province.    The Governor of  Fujian then, was Xi Jingping, who is  now the President of China.

This relationship paved way for the transfer of simple technologies  and skills  that, in the long run, won’t need ongoing donor support. 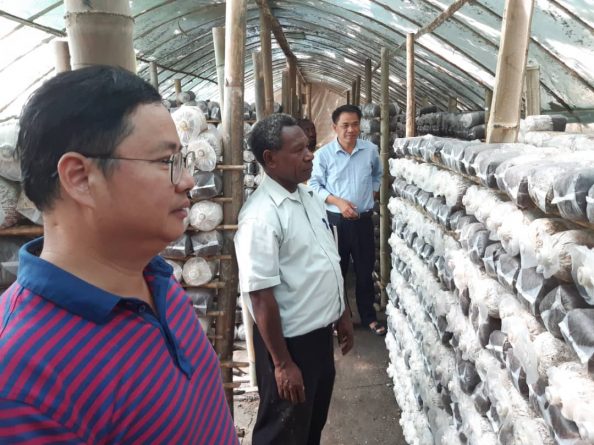 “Apart from the plastic sheeting, we don’t use imported material.  In China, we plant mushrooms in buildings because during winter, the temperature is too cold and in summer,  it’s too hot. Your climate is good. It doesn’t get too hot  or too cold,” Lin Yinzing explains.

Mushrooms are a low volume, high value crop.  Because they are fast growing, farmers stand to make higher profits  in a  much shorter time.   Farmers  begun selling mushrooms  after four months of training.

The demand for mushrooms is very high in Goroka with one kilogram selling for K30.

Eastern Highlands Governor,  Peter Numu, support from the Provincial Government stems from the desire to reduce the dependence of people  on food imports and government  support.

“People are growing their own rice to eat and with the mushrooms, they won’t need to buy food from stores.  We will also commercialize the rice production. We want to package it, label it and sell it. This will be done by the Provincial Government’s business arm.

“People are already empowered. If the government of Prime Minister, James Marape,  is talking about reducing food  import dependence,  I want to say, the Eastern Highlands is already implementing a solution.”

No evidence of plot against ex-Australia coach Stajcic: review