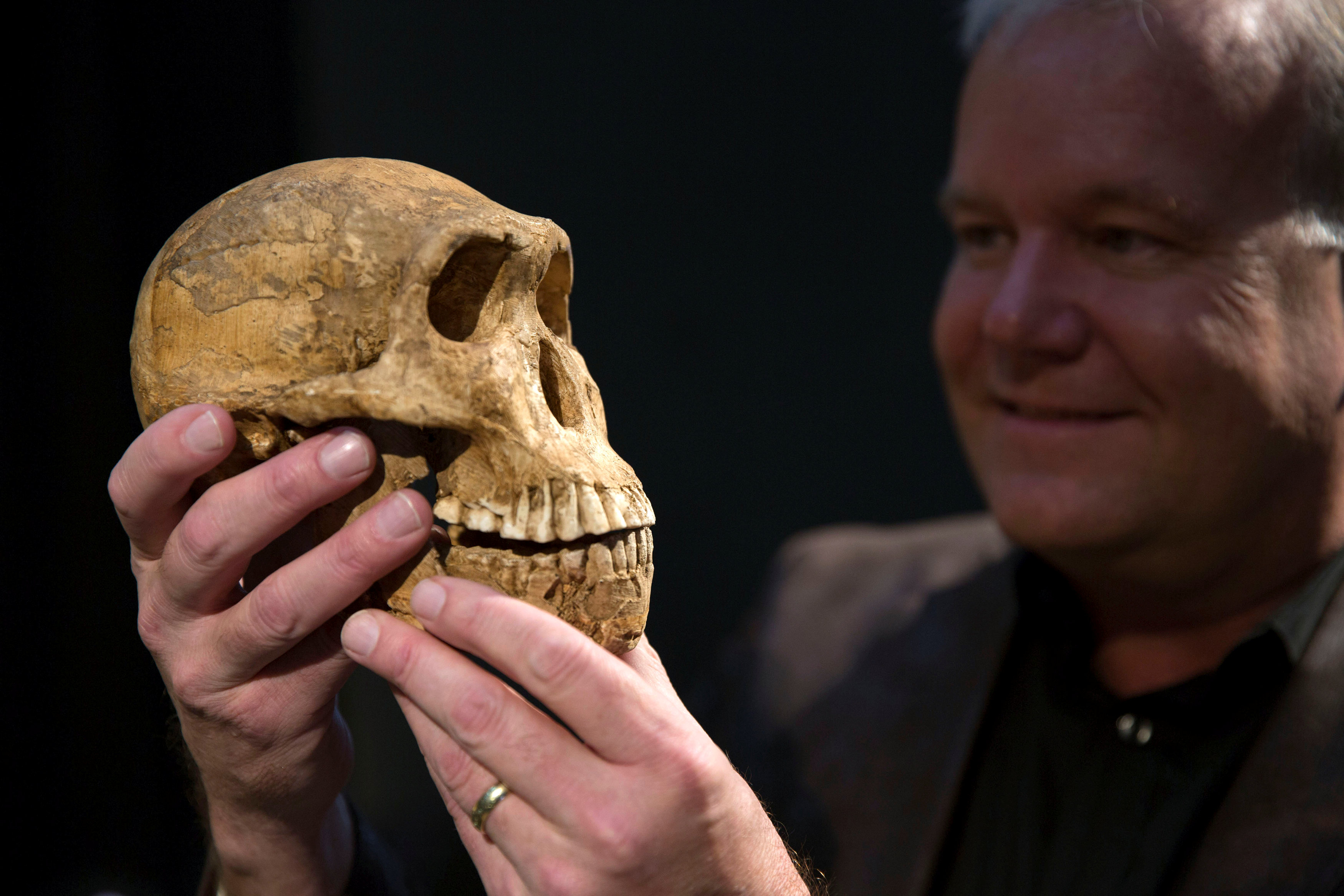 KROMDRAAI, South Africa (Reuters) – Scientists unveiled the first evidence on Tuesday that early humans co-existed in Africa 300,000 years ago with a small-brained human-like species thought to already be extinct on the continent at that time.

The findings, published in three papers in the journal “eLife”, raise fresh questions about human evolution, including the prospect that behaviors previously attributed to humans may have been developed by hominin precursors of Homo sapiens.

Hominins are an extinct group of the same genus as humans, the only surviving members of that category today. Man’s nearest living relatives, chimpanzees and gorillas, are further removed from Homo sapiens biologically than hominins are.

The species in question is Homo naledi, named in 2015 after a rich cache of its fossils was unearthed near Sterkfontein and Swartkrans in South Africa.

Journalists crowd around Homo naledi remains on display at the Cradle of Humankind World Heritage site near Johannesburg. REUTERS/James Oatway

These treasure troves, some 50 km (30 miles) northwest of Johannesburg, have yielded pieces of the puzzle of human evolution for decades.

Scientists initially thought Homo naledi’s anatomy suggested the fossils might be as much as 2.5 million years old and were startled by evidence that suggested the species may have buried its dead, a trait long believed to be uniquely human.

But dating of the sediments in which the fossils were found and teeth of the specimens showed that the species was roaming the African bush between 236,000 and 335,000 years ago, around the time that modern humans were emerging.

“No one thought that a small-brained, primitive hominin could extend down through time this long and that period is exactly the moment when we thought modern humans were arising here in Africa,” said Lee Berger, project leader for Johannesburg’s University of the Witwatersrand.

Berger said the dating may force scientists to rethink their understanding of the emergence at that time of new technologies such as ochre production and bead work for adornments.

There is archeological evidence from that period but little in the way of fossils to suggest who exactly made such things.

“Now that we know that modern humans or at least the earliest forms of them were not alone during this expansion of the tool kit, it makes us now have to get better and better evidence to say who made what,” Berger told Reuters.

The question of when Homo naledi went extinct, and why, remains unanswered, Berger said. Those pre-humans could have survived until 200,000 years ago or even more recently as the fossils uncovered so far do not indicate “an extinction event.”

Homo sapiens may have been the culprit. Some scientists believe early modern humans drove other hominin relatives – for example, Neanderthals in Europe – to extinction elsewhere.

Journalists crowd around Homo naledi remains on display at the Cradle of Humankind World Heritage site near Johannesburg. REUTERS/James Oatway

“All we know is that Homo naledi is extinct today. Could Homo sapiens have driven them extinct? Yes,” Berger said.

Scientists also know from DNA evidence that Homo sapiens interbred with Neanderthals, so it could have mated with Homo naledi as well, though it was a more primitive hominin.

“Could there have been gene exchange between Homo naledi and early Homo sapiens? It’s entirely possible,” Berger said.

He said one of the next steps in this quest was to obtain Homo naledi DNA, which has so far proved elusive, but researchers are trying.

“If we had Homo naledi DNA, not only would we be able to answer the question of a biological exchange with humans, but we would gain a window back millions of years.

“We would actually be looking at DNA from the split with humans. And that would be cool,” Berger said.