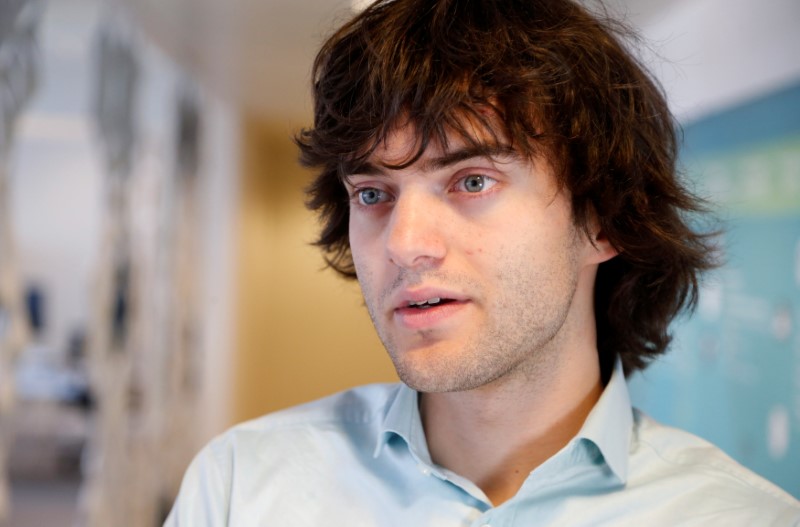 Image: Boyan Slat of the Netherlands, who started a project called The Ocean Cleanup in 2013, poses during an interview in Brussels, Belgium May 15, 2017. Picture taken May 15, 2017. REUTERS/Clement Rossignol

BRUSSELS (Reuters) – A 22-year-old Dutchman on Tuesday said it would be possible to reduce by half the millions of tonnes of plastic garbage in the Pacific by deploying floating barriers.

Boyan Slat plans to position a first barrier between Hawaii and California in 2018 to collect plastic swirling on currents in an area known as the Great Pacific garbage patch, although some environmentalists have criticized his methods.

Slat said about 50 floating barriers would be needed to halve the plastic in the Pacific over five years, and that he was still seeking further funding.

The collected plastic will be brought ashore and recycled.

“You can imagine the bumper of your next car, or the chair you’re sitting on or the frame of your phone can be ocean plastic in the future,” Slat told Reuters.

“To filter the plastic out of the water could affect very small marine life which is very important for the food chain,” said Elvira Jimenez, a coordinator for Greenpeace’s ocean campaign.

Slat said his barriers would not act like a net and would spare marine life. Plastic pollution already threatened hundreds of species with extinction, a problem that is becoming more acute over time as larger chunks of plastic break down into smaller pieces and enter the food chain, he said.

“Only a very small percentage is small pieces, most of it is still floating around in large objects like crates, buoys, bottles, even stuff like children’s toys, toothbrushes and toilet seats,” Slat said.

Slat, who dropped out of university to start the project in 2013, said he had the idea of collecting plastic when he was 16.

“I was diving in Greece and realized I was coming across more plastic bags than fish, and I wondered why don’t we clean this up,” he said.

He now runs a team of more than 60 people and has the backing of some major companies such as dredger Boskalis and chemical group Akzo Nobel.