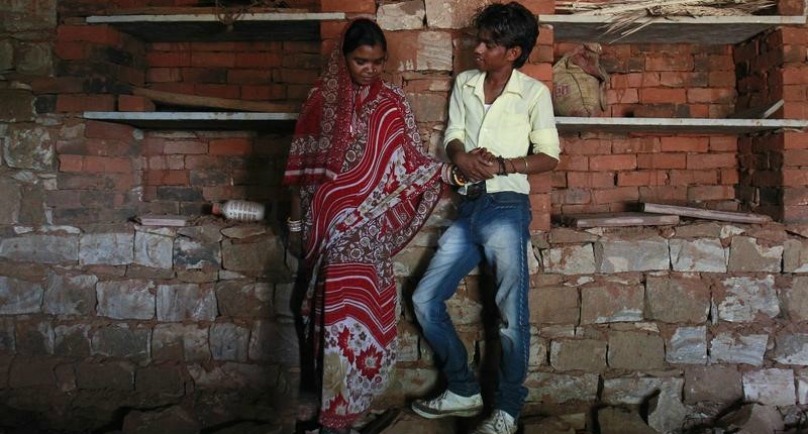 Image: Child bride Krishna, 13, stands with her husband Kishan Gopal, 15, inside a newly constructed room at her house in a village near Baran, located in the northwestern state of Rajasthan, July 17, 2012. REUTERS/Danish Siddiqui

LONDON (Thomson Reuters Foundation) – Natural and humanitarian disasters lead to a dramatic increase in child marriages as families struggle to cope, a campaign group said on Thursday, urging governments to accelerate their efforts to end the practice.

Rates of child marriage have risen sharply and in some cases doubled in three years in Syrian refugee camps in Jordan, while in Bangladesh some families are marrying off their daughters in anticipation of recurring natural disasters, the campaign group Girls not Brides said.

“Emergency situations are often the last straw for many families who are already living on the brink,” Lakshmi Sundaram, executive director of Girls Not Brides, said in a statement.

“They tip the balance and make it impossible for desperate parents to make ends meet and to protect their children. Marrying off their daughters can seem like the only option.”

Child marriage deprives girls of education and opportunities and puts them at risk of serious injury or death if they have children before their bodies are ready. They are also more vulnerable to domestic and sexual violence.

Each year more than 15 million girls worldwide are married before they turn 18, Girls not Brides said.

“It is under our watch that these girls lose their childhood, their chance to be educated, to become anything they want, and it is our responsibility, all of us together, to make sure that it stops,” said Archbishop Desmond Tutu, the Nobel Peace Prize laureate, who is supporting the group’s campaign.

Ending child marriage by 2030 is one of the targets contained in the new Sustainable Development Goals adopted by world leaders at a U.N. summit on Friday, but Sundaram said agreeing on a target is not enough to end the practice.

“Governments must draw up and enforce policies that end child marriage, and create alternatives for girls and their families,” Sundaram said.

“If governments and civil society organizations don’t act now, the number of women married in childhood will increase from more than 700 million today to 1.2 billion by 2050.”

Using a hashtag #MyLifeAt15, Girls Not Brides is calling on governments to implement and enforce their commitments to end child marriage.

Landowners Protest over Delays in Royalties