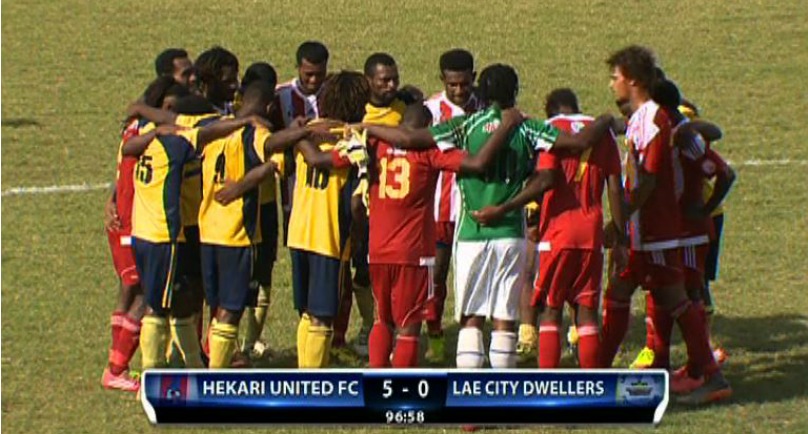 After the five goal thrashing of Lae City Dwellers, Hekari United FC have now been confirmed as Minor Premiers for the 11th consecutive season in the Telikom National Soccer League (NSL) competition.

Lae City had appeared on track to take their maiden minor premiership, however a hat-trick by Tommy Semmy and goals by Tutizama Tanito and Koriak Upaiga ensured yet another top prize for Hekari.

Prior to the 2pm kick off, the hype had surrounded the status of the match, considering that these were the two best attacking sides in the competition.

Both clubs shared similarities, in that they had had crushing 5-0 victories apiece in the previous matches.

Hekari franchise owner, John Kapi Natto, had stated on the eve of the game that Hekari were a beatable side, but quality on the pitch had been a determining factor in their success over the years.

Lae City Dwellers Coach, Peter Gunemba, also spoke highly of his side, and noted the difference between both sides in an interview before the match.

However, it was a different result altogether when both sides took the pitch, a hat-trick by Hekari striker Tommy Semmy silencing more than his critics, with the visitors left dumbfounded by the result.

Either side of half time, Semmy fired bullets from a distance, leaving Lae keeper Warisan furious at his defence.

While Hekari showed little if any weakness, it was the surprisingly poor performance by Lae City themselves that left many shaking their heads.

Hekari’s win means they now take out a record number of minor premierships, unrivalled by any other club in any other sport in PNG. The NSL Grand Final, slated for March 19, will feature both sides again.

Hekari undoubtedly will be buoyed by the win, but they will be taking no chances, as Lae City are still their closest rivals on the domestic front.

Tkatchenko: Weather Not an Issue