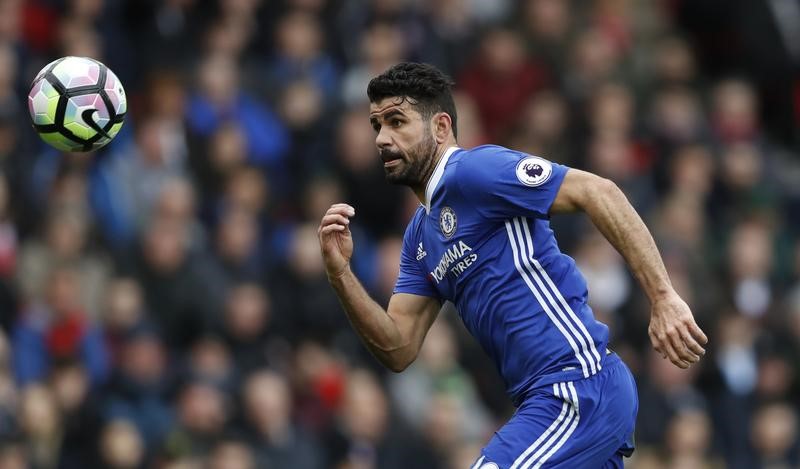 The alternative scenario, that fourth-placed City could win and help Tottenham Hotspur close the gap at the top to four points, does not bear thinking about for the Spain international.

The hosts are seven points clear of Spurs, and 11 ahead of City, who drew 2-2 at Arsenal on Sunday after twice taking the lead.

But Saturday’s surprise 2-1 home defeat to lowly Crystal Palace has revived hopes elsewhere that Chelsea could be vulnerable.

That first home defeat since September was also a wake-up call for Antonio Conte’s side, who have looked title certainties.

“Now is not the time to let ourselves down,” Costa, who has scored 17 league goals this season but only four since Christmas, told ESPN Brazil.

“We should keep our heads up and think ahead for the next game since it will be very important.

“This game against City will be a six-point affair since if we win…they will (effectively) be out of the title race while we keep the advantage.”

Both sides will be looking back to last year for comfort, with Chelsea winning 3-1 at the Etihad in December while City won 3-0 at Stamford Bridge last April against an off-form home side with very little to play for.

Sergio Aguero scored a hat-trick then and was also on the scoresheet against Arsenal, with manager Pep Guardiola staying hopeful.

“We know what we have to do against Chelsea. We head back to Manchester to prepare and then back down to London,” said the Spaniard, whose side have lost only one of their last six Premier League games in London.

Chelsea hope to have wing-back Victor Moses back in action after a calf injury ruled him out at the weekend.

Spurs, still without injured striker Harry Kane, can put more pressure on Chelsea when they travel to relegation-threatened Swansea City, who have never beaten them in the Premier League and are now a point above the drop zone.

At the bottom, Sunderland have a tough trip to resurgent champions Leicester City on Tuesday while last but one Middlesbrough have a basement battle against Hull City, who are one place above but four points clear, on Wednesday.

Palace travel to Southampton on Wednesday as Sam Allardyce’s team seek to edge closer to safety with a fifth successive victory.