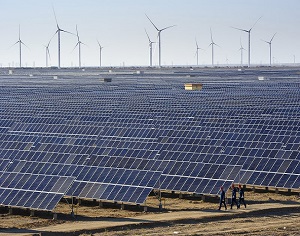 Solar and wind power, especially in developing countries, are driving spending higher and last year for the first time renewables made up more than 50 percent of new electricity capacity plans, the Frankfurt School of Finance report said.

“The term ‘niche product’ no longer applies to renewables,” said Ulf Moslener, professor for sustainable energy finance at the school and one of the report’s authors.

“Investments are becoming less expensive, due to falling equipment costs, which will also enable further growth, especially in light of the new momentum from the Paris climate summit goals,” he told reporters.

Solar power accounted for $148 billion, up 12 percent partly driven by an ongoing solar boom in Japan.

Wind accounted for $107 billion, up 9 percent helped by offshore projects.

Biomass accounted for just $5 billion of investment pledges, down 46 percent.

The study excludes large hydrological power projects because of environmental concerns. Other studies which include such data therefore may arrive at larger sums.

China accounted for $103 billion of the total, up 17 percent, ahead of Europe with $49 billion, the United States with $44.1 billion and Asia, excluding China and India, at $48 billion.

China expects its greenhouse gas emissions to peak by “around 2030” as part of its commitments to a global pact to combat global warming signed in Paris last year.

China, India and Brazil and other emerging nations jointly outdid developed nations, with $156 billion or 55 percent of the total.

Spending plans in Germany, a leader in renewable projects, technology and research, fell by 46 percent to $8.5 billion in their steepest fall in 12 years, the report said.

Factors behind that fall included lower costs, limits to available land, and regulatory changes aimed at forcing renewables into market-based remuneration and away from fixed tariffs, it’said.

The full report is available at http://fs-unep-centre.org