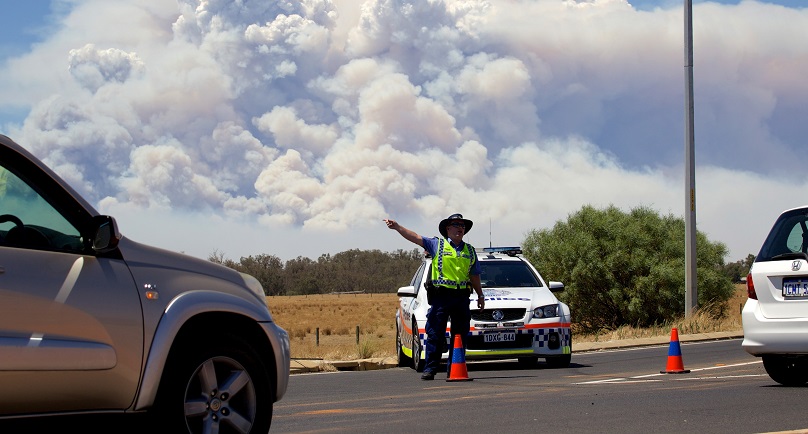 Image: Smoke clouds from a large bush fire are seen behind a police road block at the turn off onto the South Western Highway near Pinjarra, Western Australia, January 7, 2016. REUTERS/Richard Wainwright/AAP

PERTH (Reuters) – Two people have been killed, at least one other remains unaccounted for and more than 121 buildings have been destroyed by a bushfire that continues to burn out of control in Western Australia, police said on Saturday.

The remains of two men were found by authorities searching burnt-out buildings in the historic timber milling town of Yarloop, 120 km (75 miles) south of the capital, Perth, which was destroyed by the fire on Thursday, police confirmed. The men, both believed to be in their 70s, haven’t been formally identified.

A state of emergency has been declared and residents evacuated from five nearby towns in the major beef and dairy farming area. Dairy farmers near the fire have been forced to dump thousands of liters of milk since Thursday as road closures prevent tankers being able to reach farms and power cuts prevent production.

Holiday makers in nearby coastal resorts have also been evacuated by ferry as exit roads remain cut and damaged by the fire.

The fire, ignited by a lightening strike on Wednesday, has now burned through some 67,000 hectares (166,000 acres) of land, is uncontained and has a 222 km perimeter. Firefighters have flown in from New South Wales to relieve fatigued local crews. Another large fire in the state’s south east, west of the town of Esperance, is also burning out of control and threatening homes.

Wildfires are an annual summer event in Australia, but rising temperatures have prompted some scientists to warn that climate change could increase the length and intensity of the summer fire season.

Four people were killed in a series of bushfires sparked by lightning in Western Australia in November and more than 100 homes were destroyed in fires on Christmas Day in Victoria. Australia experienced its fifth hottest year on record in 2015, according to the Bureau of Meteorology, which has been keeping statistics since 1910.

Wildfire in Kansas and Oklahoma kills livestock on ranches