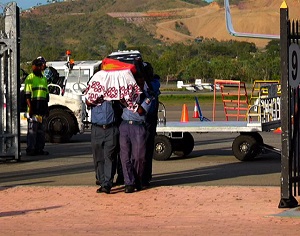 NCD police have staged a guard of honor parade at the Jackson’s International Airport to receive the casket of a well-respected police officer, who died while on duty in the Northern Province.

The casket of late, Senior Sergeant Jerry Biamaga, arrived in Port Moresby and was welcomed by his immediate family, relatives, colleagues and friends.

Biamaga was attached to the Special Services Division and had passed away after he collapsed in Popondetta.

The body of the late senior sergeant arrived in Port Moresby at 5pm yesterday on Air Niugini’s PX flight 0857 from Popondetta.

His casket was carried by his colleagues through the guard of honour and escorted to his family home at the McGregor Police Barracks.

The late Senior Sergeant was deployed to Northern for the by-election for the Ijiviatari Open last year and continued working in Popondetta until his passing last week.

Biamaga has over 20 years of experience with the Police Force and had served during the Bougainville Crisis in the Autonomous Region of Bougainville and had also lead police operations in the Western, Gulf and Northern provinces.

A Haus Karai has been set up at his family home at McGregor Police Barracks.

Biamaga is survived by his wife, two daughters and five sons.