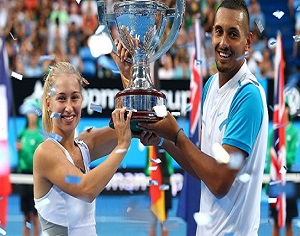 Kyrgios and Daria Gavrilova, playing for Australia Green, one of two teams representing the host nation, both won their singles matches in straight sets against Alexandr Dolgopolov and Elina Svitolina respectively.

Kyrgios, who defeated world number two Briton Andy Murray during his four-match winning run this week, brushed aside the challenge from Dolgopolov 6-3 6-4 after the 36th-ranked Gavrilova had opened with a 6-4 7-6(6) win over Svitolina.

With the Australian open not too long away, Australian Nick Kyrgios was impressive in the Hopman Cup as he powered the host nation to the mixed-team Hopman cup title against Ukraine yesterday.

The victories at the Perth event will boost world number 30 Kyrgios’ confidence as he prepares for the first grand slam of the season beginning in Melbourne on Jan. 18.