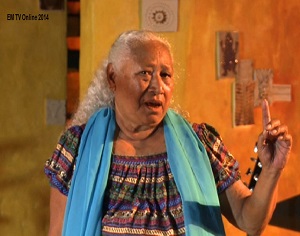 Early Papua New Guinean writers are today, renowned for having created, through their writing, literature that captures PNG’s unique and vast culture.

Through writers like the late Dr. Regis Stella and Russell Soaba, more works from local writers have surfaced, giving Papua New Guinea an identity in literature.

The amphitheatre in Port Moresby was named after one of PNG’s first female writers, Nora Vagi Brash.

This was to honour the literary work Brash did during her time as a theatre artist and writer.

The recently renovated amphitheatre was launched last night, Wednesday December 4, 2014, in recognition and appreciation of Nora’s many contributions to PNG literature.

Brash’s contributions include novels, poems and plays including the famous, Which Way Big Man?

Most of her writings captured the transition period from pre to post colonialism, and how native writers used literature as a uniting tool during the days leading up to independence.

Her work stood out from other writers because she continuously portrayed the traditional role of women in any native society, and how it changed with the arrival of colonisers.

Brash will be turning 70 this year, but says “her love for theatre performance is as fresh as it was in her young days”.

With the amphitheatre named after her, she wants to work with a young team to stage a play for the last time.

She said PNG culture is captured in writings and encouraged more young people to write about it.

The launch was witnessed by lecturers from the University of Papua New Guinea’s Language and Literature strand, the diplomatic community, and the PNG government.

Born in Dagoda Village, Central Province, Papua New Guinea, Ms Vagi Brash graduated as a teacher in 1965 at Port Moresby teachersollege and went on to graduate with a Bachelor of Arts in literature and Diploma in Journalism from the University of Papua New Guinea.

Her achievements include being the “Dux of College”, winning the prestigious citizenship prize from Rotary, and being a winner of the “College Blue” in outstanding leadership qualities.

Ms Nora Vagi Brash is a prominent figure in PNG best known as a playwright who produced her own plays and has held a variety of senior positions in the public and private sector. She has successully contributed to the media, communication, education, curriculum development and training and research sectors for the government of PNG and international development organisations.

She is also the major shareholder and Executive Director of Tanorama Limited, a successul consulting and project management firm with offices in PNG and Australia.

Marape on Tribal Fights in District