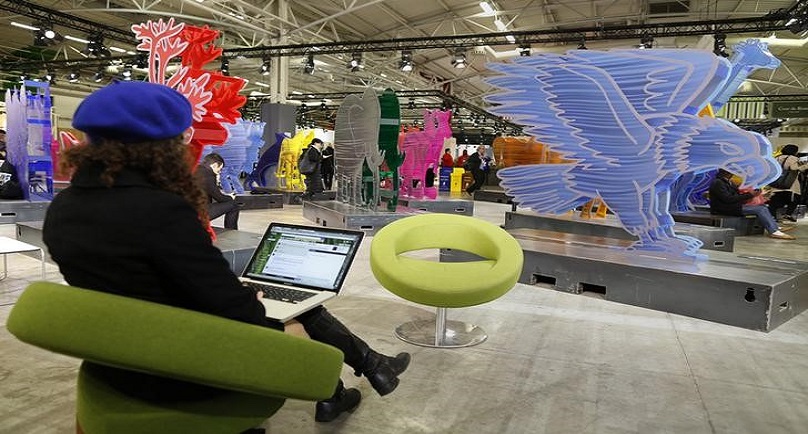 Image: An observer works on his computer at the World Climate Change Conference 2015 (COP21) in Le Bourget, near Paris, France, December 10, 2015. REUTERS/Jacky Naegelen

PARIS (Reuters) – It would have been unthinkable just a few months ago, but a new global deal to combat climate change appears poised to set the world a much more ambitious target than expected, even if achieving that goal is far out of reach for now.

With the unexpected support of the United States and Europe, the agreement, due to be completed within days, seems set to go beyond the current goal of limiting the rise in global temperatures to 2 degrees Celsius (3.6F) above pre-industrial levels.

Instead, the latest draft released late on Thursday, states a new goal to keep the rise “to well below 2 degrees Celsius above pre-industrial levels and to pursue efforts to limit the temperature increase to 1.5 degrees Celsius”. It is the first draft that does not offer alternate options for the goal.

Even though the cuts to greenhouse gas emissions being pledged in Paris will not come close even to limiting the rise to 2C, an explicit recognition of how much more is needed could still set the world on a path to more decisive action in future.

U.S. Secretary of State John Kerry announced on Wednesday that the United States would join around 100 countries in a “high ambition coalition” seeking to go beyond 2C, a level that low-lying island states such as the Marshall Islands say may not be enough to stop them being submerged by the end of the century.

Marshall Islands Foreign Minister Tony de Brum, who formed the ad hoc group during sideline meetings over the past few months, said a higher target, and cycles of negotiations to get countries to “ratchet up” their emissions cuts, were the “beating heart of the Paris agreement”.

Last week, Germany and France came out in support of another coalition called the Climate Vulnerable Forum (CVF), who have championed the 1.5C limit since 2009.

Monica Araya, adviser to the CVF and former Costa Rican climate negotiator, said the rich countries’ change of heart was a “shift of the tectonic plates” in the debate.

If the text remains intact, it would be a symbolic defeat for some countries that have opposed the more ambitious goal, particularly oil exporting Gulf states.

Saudi Arabia last week blocked initial attempts to include references in the Paris deal to a U.N. report that recommended 1.5C as a target, arguing that reaching it could imperil food security because it would require massive planting of trees on farmland.

Saudi negotiator Khalid Abuleif said scientists did not have “robust information and the support of science to act practically and meet such criteria”. Saudi officials were not immediately available to comment on the new draft.

India, which has led demands for richer countries to take a bigger share of the load, offered conditional support for a 1.5C target if those developed nations accepted bigger emissions cuts.

The 2C target was always somewhat arbitrary as a threshold for preventing the worst effects of global warming in the form of rising sea levels and more severe and frequent storms, floods and droughts.

Average surface temperatures have already risen by 1C, and greenhouse gases already emitted and locked into the system are likely to push the rise past 1.5C within a few decades.

The U.N.’s main scientific body, the Intergovernmental Panel on Climate Change (IPCC), has said that just aiming for a 1.5 degree long-term pathway would put countries on course to meet the 2 degree goal, but concedes that research is incomplete.

“There is limited evidence of the likely impact of 1.5 degrees and more research needs to be done,” said IPCC head Hoesung Lee.

In the very short term, a bolder goal will make little difference. Ahead of the Paris summit, nearly every nation submitted its own plan for curbing emissions, but those measures in total will fall far short of even meeting the 2C goal.

Michiel Schaeffer, a researcher with Climate Analytics, said the only difference between achieving 1.5C and 2C was the speed at which carbon-reducing technologies such as energy efficiency and carbon capture and storage had to be deployed: