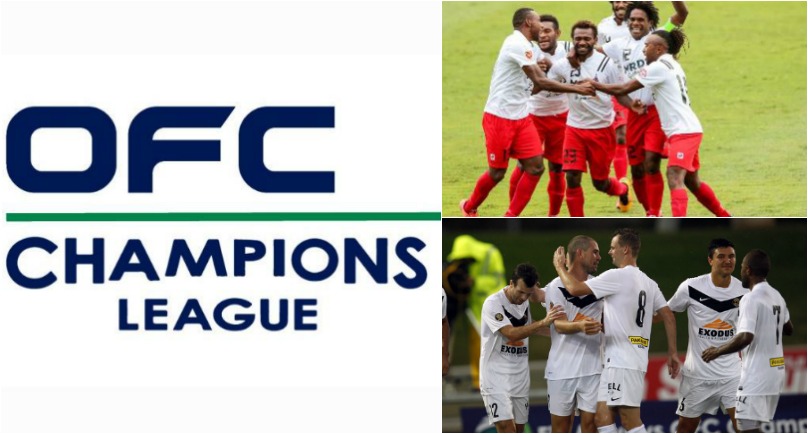 A real battle has emerged for top spot in Group B of the OFC Champions League after Hekari United and Team Wellington both earned their second straight victories on Match Day 5.

This afternoon’s results leave the beaten sides, Suva FA and AS Lossi, out of the running to make the knockout stages while the group’s last match between Wellington and Hekari on Saturday will effectively act as a head-to-head showdown for the semi-finals.

The loser of that match may still progress as the best-placed runner-up but that is likely to depend on the health of their goal tally.

There was therefore every incentive today to find the back of the net as much as possible and Hekari had clearly set out to do just that against Suva.

It took only 16 minutes for the 2010 champions to get their noses in front, skilful Solomon Islander Gagame Feni rifling in a stinging strike following a corner from Matthias Iani.

The dangerous Tommy Semmy made it 2-0 not long after with a clinical finish from the edge of the area on 31 minutes, putting Hekari in control heading into the break.

But their hopes of going on the goal rampage in the second half didn’t materialise as the Suva defence proved impenetrable until just over 10 minutes to go, Joses Nawo finally putting the result beyond doubt with a powerful effort that goalkeeper Beniamino Mateinaqara got a hand to but couldn’t keep out.

All three of the scorers had also notched in Hekari’s earlier 5-1 rout of Lossi and, if the Papua New Guinea’side can make it out of the group, will be players to watch in the semi-finals.

Coach Jerry Sam was a satisfied man at the final whistle but knows the biggest test is yet to come in the form of the New Zealand champions.

“I was really happy today but we have Team Wellington next and it won’t be easy,” he said.

“We wanted to use the same game plan as in the first game – making sure not to play long balls because that’s where Suva are good. We shut them down and moved the ball quickly, as well as taking our chances.”

Suva coach Gurjit Singh felt his charges were nowhere near their best.

“It wasn’t really a good performance, I wasn’t happy with it,” he said.

“We didn’t play the way we played in the first game, we were really lethargic today and made a lot of mistakes. They have a good set of boys, some very technical players and the credit has to go to them.”

In the second match of the afternoon, Wellington managed to keep the pressure on Hekari but found the going tougher than their rivals for first place, needing to come from behind to beat Lossi 2-1.

Lossi had begun the competition in underwhelming fashion by shipping five goals against Hekari and knew they needed to respond well today to have any chance of keeping their semi-final hopes alive.

They set about doing just that when Jim Ouka earned them a surprise lead shortly before the break, giving goalkeeper Scott Basalaj no chance in a one-on-one situation after latching on to a defence-splitting pass.

But the New Caledonians weren’t able to hang on to their advantage for long as Wellington reacted to the half-time words of coach Matt Calcott by drawing level in the 48th minute. A trademark effort from free-kick specialist Alex Feneridis rebounded off goalkeeper Michel Hne and Tom Jackson was on hand to tap in from close range, setting up an intriguing second half.

Lossi continued to foot it with their more-fancied opponents but finally fell behind when Mario Barcia’s looping header sailed over the outstretched arm of Hne in the 64th minute.

Wellington did not manage to kick on from that point and put the game to bed though, and the door was swung open for Lossi when midfielder Chris Bale saw red for a second bookable offence on 87 minutes.

But, despite seven minutes of additional time, Lossi could not find the goals that would have kept them in the competition as the ten men of Wellington held on for a nervy 2-1 victory.

“We had to work hard for that win, to get the three points was crucial really,” Calcott said.

“Once again, I thought we struggled for the first 45 minutes but it was a much better second half. Lossi did well, they pressed us high and their goal came from that.”

Lossi coach Stephane Drahusak was disappointed to take nothing from the game as he felt the efforts of his players warranted a better outcome.

“I think we deserved to win but the experience of the other side showed in the second half,” he said.

“Both of the goals came from set pieces and that is hard to take. But I thought there were some encouraging things that came out of today’s match.”

Sponsors
The OFC would like to acknowledge its sponsors iRENA, Telikom PNG, Konika Minolta, Tranzit Coachlines, Frucor and UNICEF.

Portugal Through To Semis in CONFED Cup