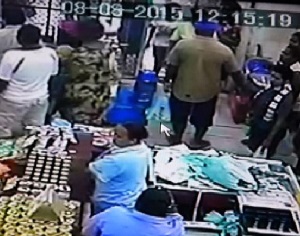 The 15 men entered the store at 12:10 pm on Saturday and ransacked the place along with customers who lay helplessly on the floor.

Up to K25,000 in cash was robbed along with the unknown amount from customers.

Branch Manager, Michael Than, tells EMTV News that the robbery, as seen captured on the store’s CCTV cameras, happened so fast that by the time he could react, the robbers had already left the store.

Betty Ipai, the cashier who was forced to open the till is still traumatized from the incident. As she recounts what happened, it is clear that she will most likely never forget it.

The robbers left the store with three cashiers, wallets and Bags.

Gerehu Police were notified right after the incident and the chase went on to Gerehu stage 6 where the abandoned getaway vehicle was found.

The blue Nissan van is registered to a government agency.

The Gerehu Police commander was unable to comment today on the robbery.