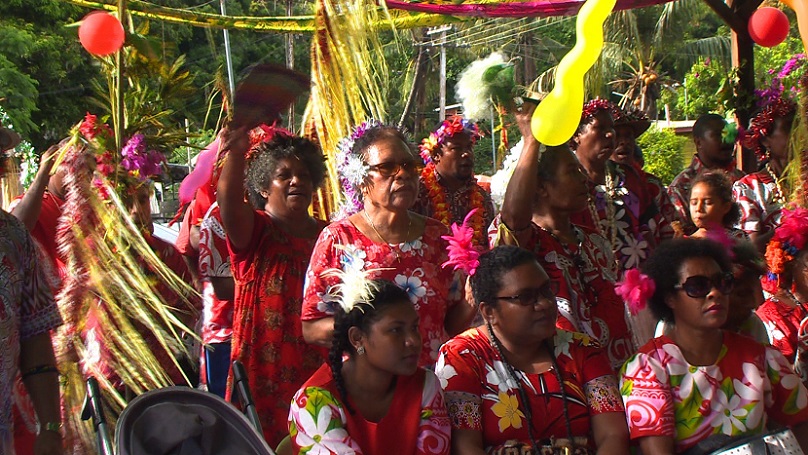 The heavy downpour yesterday did not dampen the Festive spirit, with a village on the outskirts of Port Moresby celebrating in style.

Vabukori Village came alive yesterday with a friendly competition of prophetic singing, or the Peroveta, which united the villagers.

Despite the heavy downpour, Vabukori villagers continued with fun-filled festivities with the singing of prophetic songs from the Bible.

It is the biggest annual event held in the village that everyone looks forward to, and draws attention from outsiders as well.

This event is celebrated annually on December 26, where members of the village, split themselves into two groups, in which a group will play host and sing, while the other is responsible for catering.

The two groups are; Kudou Lalokau, which translates from Motu into Heart of Love; and Bethlehem Group.

However this year saw a change in celebrations, which was also a first for the village.

“This year the village authority, brought up the idea about the two groups that come together, sing and do their own cooking” said Kudou Lalokau Group Chairman, Tamasi Maki.

Prophetic singing is part of an important history of the village, brought in by early missionaries that taught them about Christianity.

According to Vabukori Village Chairman, Reatau Rau, when the South Sea Missionaries came to the Motuan Villages, they brought prophetic singing to teach them about the Bible, who at that time did not know how to read and write.

The prophetic songs performed yesterday, covered all books of the Bible, starting from Genesis to Revelations.

This event is also a way of reviving songs and beliefs that are slowly fading away.

Mr Rau said, “The younger generation is influenced by technology and globalisation. The whole idea to hold the competition at this time is to engage the young people.”

This is part of their festive celebrations leading up to the New Year.