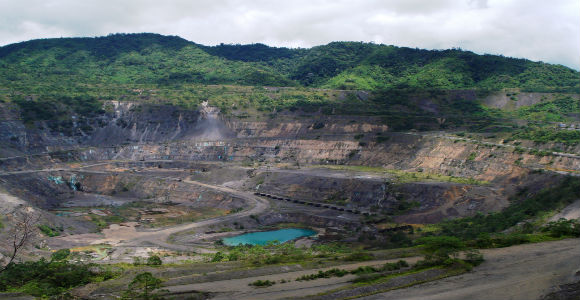 If the giant Panguna copper mine on Bougainville is ever to re-open, many complex problems must be solved, including the status of the former miner, Bougainville Copper Limited (BCL). In this exclusive interview with Business Advantage PNG, BCL Chairman Rob Burns outlines its strategy to return to mining.

In June 2016, Australian resources giant Rio Tinto announced it was walking away from its involvement in the now-dormant Panguna copper-gold mine on Bougainville, by giving its shareholding in Bougainville Copper Ltd (BCL) to the national and Bougainville governments.

‘With input from our shareholders, we have confirmed BCL’s vision to return to active exploration and profitable, sustainable mining,’ says Burns. ‘The new Panguna will be for the benefit of all the stakeholders.’

The new direction is aimed at reviving the mine, which has been closed since 1989 as a result of prolonged conflict.

‘[Panguna] has estimated reserves of one billion tonnes of copper and 12 million ounces of gold.’

The stakes are high. When it closed, Panguna was the world’s largest open pit copper-gold mine, generating over 40 per cent of PNG’s GDP.

It still has estimated reserves of one billion tonnes of copper and 12 million ounces of gold, according to Porter Geo Consultancy. 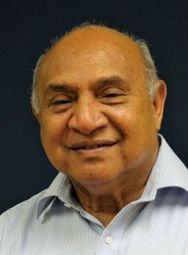 In August, 2014, the Autonomous Bougainville Government (ABG) paved the way for reopening the mine, with a new mining law, but last year, Rio Tinto decided to cut its losses and walk away, in the process gifting its 53.8 percent shareholding in BCL—17.4 per cent to the national government, and 36.4 per cent to the ABG.

Both governments now hold 36.4 per cent of BCL, with the rest of the shares held by European shareholders (4 per cent) and private investors through the Australian Stock Exchange (23 per cent).

Prime Minister Peter O’Neill has said he would pass the PNG government’s 17.4 per cent shareholding over directly to the landowners and people of Bougainville, rather than to the ABG. It is currently held by Kumul Minerals Holdings, a PNG state entity.

For Burns, sorting out the 17.4 per cent shareholding is one of seven key issues needed to reduce sovereign risk before he can raise the money for a feasibility study to determine the project cost and method of re-opening the mine. Addressing these impediments is referred to as Stage Zero.

‘The status of the 17.4 per shareholding is important,’ says Burns, ‘and it’s something that needs to be resolved. That would go a long way to going forward.’

The other major issues, according to Burns, are:

At present, BCL only holds an exploration licence, which was due for renewal in September 2016. Under the Bougainville Mining Act 2015, the ABG needs to hold wardens’ hearings as part of the process for a five-year renewal of the lease. In the meantime, the exploration licence remains in place.

‘We’ve been making historic, one-off compensation payments for the period March 1990 to March 1991, so we have safe and secure access to some areas, but not all.’

Burns says reaction to his presentation to landowners and the ABG in early March was ‘extremely positive’.

’They pointed out their budget comes from the National Government and donors and they need to get fiscal independence. This is an opportunity to achieve that.’ 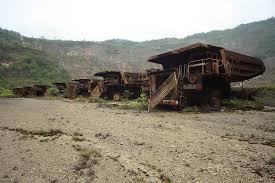 The deserted Panguna mine. Credit: Ramumine

In 2012, it was estimated that the investment to get the mine production-ready would be about A$6 billion (K14.4 billion). The asset at that time was valued at A$75 billion (K179 billion). Burns says these estimates were ‘at the top of the market’ and may need to be revised.

‘We’ve got a path to de-risk the project and demonstrate its viability to enable the A$100m bankable feasibility study. We haven’t the financial capability to do that at this stage,’ says Burns.

There are two ways of raising that capital, he says. One is through an equity raising, the other by bringing in a strategic partner.

‘…of all the mining projects in PNG it’s Ok Tedi that compares to Panguna in terms of scale, so there’s a lot of expertise over there.’

‘I wouldn’t rule out necessarily that we wouldn’t be able to equity-raise A$100 million,’ he says.

‘The share price of BCL has fluctuated quite considerably. Go back to 2012, the share price was A$1.40, which gives you a market capitalisation of A$600 million.’

Burns has no strategic partner in mind, although he admits ‘some people have indicated interest but we’ve put that to one side until we’ve de-risked the project’.

Could Ok Tedi be seen as a partner? ‘Of all the mining projects in PNG, it is Ok Tedi that compares to Panguna in terms of scale,’ says Burns.

‘So there’s a lot of expertise over there. It would have to be acceptable to the ABG, but I wouldn’t rule it in or out.’

This month, BCL advertised for a General Manager, and will open an office in Buka, so that the company will have a base close to where the ABG is located. Should the feasibility study begin, Burns expects that an office will also be opened in Arawa.