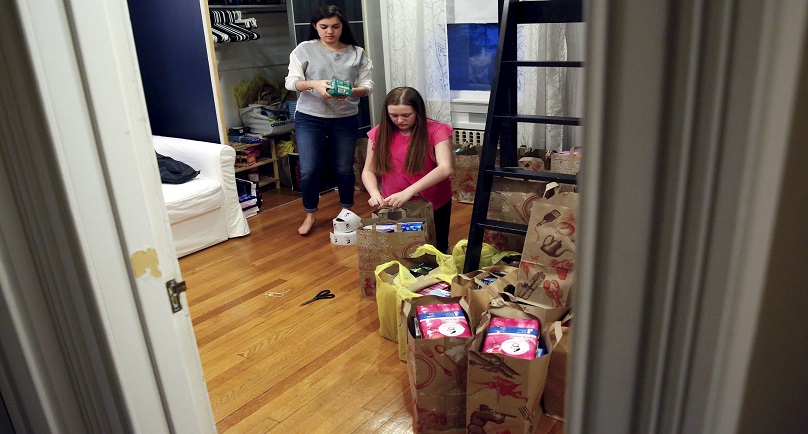 The South Orange, New Jersey, residents got the idea for their charity, Girls Helping Girls Period, when Emma learned that federal assistance programs for the indigent do not cover menstruation products, leaving many low-income and homeless women to cope with their cycles on their own.

“We found out a lot of people don’t know that,” Emma said. “That’s the point: to educate the public and to eliminate this issue of being afraid to talk about it. It shouldn’t be a thing we hide.”

The project, Girlshelpinggirlsperiod.org, is part of a growing national movement to address the inequities that have sprung up as a result of the stigma that still surrounds menstruation.

Some prisons, for example, force female inmates to buy pads at the commissary, and public restrooms rarely provide them free of charge for emergencies.

New York and 39 other states impose sales taxes on tampons and sanitary napkins, while exempting the Rogaine hair regrowth treatment, condoms and other products mostly used by men. Advocates have sued in New York, citing a double standard.

Women’s advocates say budgets for homeless shelters, schools, prisons and public restrooms should provide free tampons and sanitary napkins, just as they do for soap, toilet paper and other essentials.

In a country where erectile dysfunction ads fill television commercial slots and jokes about flatulence and bowel movements have inspired entire books, the bodily function of menstruation endures as a taboo subject.

“It goes all the way back to Eve, to religion, misogyny, all the societal norms we’ve been brought up with,” said Maplewood, New Jersey, lawyer Jennifer Weiss-Wolf, who advocates for equitable menstrual policy in the United States.

The shame and embarrassment that many women still feel is reflected in the proliferation of euphemisms for menstruation around the world. “Shark week,” “the curse,” “a visit from Aunt Flo” and “having the painters in” are a few of the 5,000 names documented in a 2015 survey of 90,000 people in 190 countries that was carried out by German healthcare company Clue.

“We are trained not to talk about it,” Weiss-Wolf said. “When we don’t talk about it, we don’t consider it. We don’t think, ‘Hey, for poor people, this is actually expensive; this can be a problem.'”

Experts say the average woman spends $70 a year on tampons and pads, not to mention the cost of replacing underwear and clothing when accidents inevitably happen.

Eighty-six percent of U.S. women aged 18 to 54 say they have experienced the unexpected onset of their period in public without the supplies they needed, according to a 2013 survey conducted on behalf of FreeTheTampons.org, an Ohio-based initiative to provide free tampons in restrooms.

“Menstrual products are not luxury items,” said U.S. Representative Grace Meng of Queens, New York. Because of her efforts, the Federal Emergency

Management Agency updated its rules to allow homeless people to pay for tampons with funds once restricted to such items as diapers and toothpaste.

“We’ve heard stories of young girls using rags, where girls are not able to go to school on days that they get their period,” said Meng. “If you’re missing an average of five days of school each month, this affects more than just menstruation time.”

The problem extends far beyond the United States, with 17 percent of women around the world saying they had missed school, work or an event because they were afraid someone might find out they had their period, the Clue survey found.

At the same time, American girls are menstruating at an increasingly earlier age due to improved nutrition. The average girl starts having her period at age 12 and bleeds for up to seven days a month until she is about 50 years old, according to the womenshealth.gov website.

A more matter-of-fact attitude toward menstruation appears to be gaining traction, as evidenced by straightforward advertisements on New York City subways touting Thinx “period-proof” underwear as absorbing “2 tampons’ worth of blood.”

In another sign of change, a free tampon dispenser is being installed in a Queens high school as part of a pilot program aimed at putting the machines throughout the New York City public-school system, the nation’s largest, with more than 1 million students.

“It used to be a nasty subject in health class,” said 12-year-old Quinn Joy. “But the moment I found out people were missing school and work, I got over it. Now it’s just woman toilet paper.”