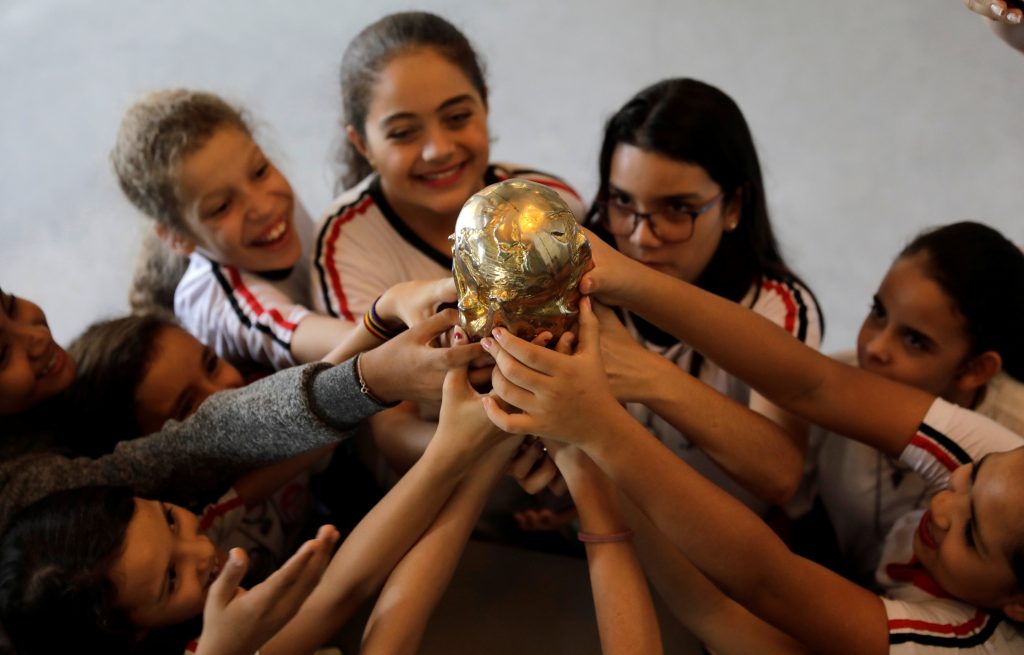 Students touch a replica of a FIFA World Cup trophy at the Football Museum in Sao Paulo, Brazil May 18, 2018. REUTERS/Paulo Whitaker

MOSCOW (Reuters) – The World Cup will be heading to North America for the fourth time if the hosting rights to the 2026 are, as expected, handed to the joint bid from the United States, Mexico and Canada at Wednesday’s FIFA congress in Moscow.

The rival bid from Morocco, for the first 48-team tournament, was hoping for a late surge in support from lobbying efforts in the Russian capital on Tuesday but most observers expect the African bid to fall short.

The Dutch Football Federation (KNVB) came out in support for the Morocco bid while the campaign is confident that the federations from Guam, American Samoa, the U.S. Virgin Islands and Puerto Rico will not be allowed to vote given they are U.S territories.

The North American bid began the campaign as strong favourites but Morocco has enjoyed some success over recent months and the result could be closer than anticipated.

But while FIFA politics has a habit of throwing up surprises, the promise of a handsome profit from games played at large capacity, already existing stadiums across North America is likely to sway enough voters.

The last time FIFA voted on World Cup hosting rights was in 2010 with the decision resting with the old executive committee and they chose Russia to host the 2018 tournament and Qatar for 2022.

Several members of that committee were later banned from the game after they were caught up in the corruption scandal that engulfed world football’s governing body in 2015.

Under FIFA’s new system for choosing the host nation for the lucrative tournament, all eligible football federations who attend congress will be given a vote.

The result has been a jet-setting campaign from both bids who have travelled the globe in an attempt to win over the worldwide electorate.

Both bids will be given one last chance to make their case with 15 minute presentations in front of congress, at the Moscow Expocentre.

US Soccer president Carlos Cordeiro has said his bid would generate $14 billion (£10.4 billion) in revenue and make an $11 billion profit for FIFA. The bid also expects record ticket and hospitality revenue.

Although it would be the first tournament to be hosted by three nations, the vast majority of games will be held in the Unites States.

Of the 80 games, ten matches will be held in Canada, ten in Mexico and 60 in the U.S. with the final played at MetLife Stadium in New Jersey, home to the NFL’s New York Giants and New York Jets.

U.S. President Donald Trump has backed the tri-nation bid and his administration has given guarantees about trade, tax and other requirements demanded by FIFA.

In April, Trump caused controversy with a tweet that some interpreted as a threat. “It would be a shame if countries that we always support were to lobby against the U.S. bid. Why should we be supporting these countries when they don’t support us (including at the United Nations)?” he wrote.

U.S soccer officials have been meeting regularly with the Trump administration, including the President’s son-in-law and advisor Jared Kushner, a source close to the bid told Reuters.

The Morocco bid has focused on the country’s proximity to Europe which they say brings benefits in terms of fan access and time slots for European broadcasters.

Africa has only once hosted the tournament, in 2010 when the World Cup was played in South Africa.

BSP kicks off with K40,000 for Rabaul School Select Side Rugby League Teams