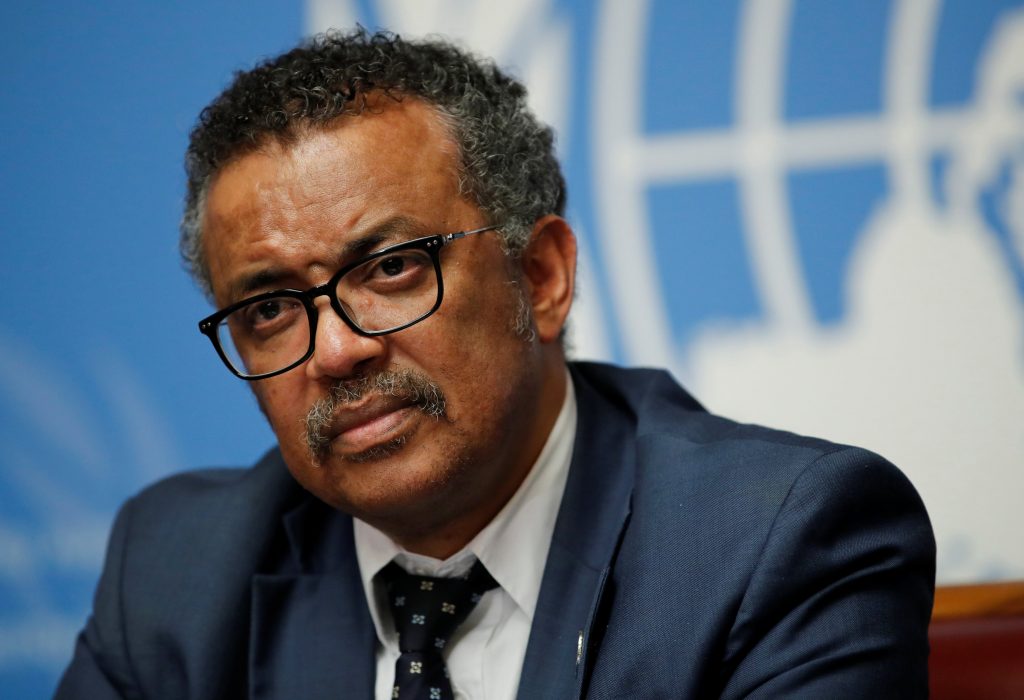 FILE PHOTO: Director-General of the World Health Organization (WHO) Tedros Adhanom Ghebreyesus attends a news conference after an Emergency Committee meeting on the Ebola outbreak in the Democratic Republic of Congo, and two days before the start of the WHO’s annual World Health Assembly at the United Nations in Geneva, Switzerland, May 18, 2018. REUTERS/Denis Balibouse

KINSHASA (Reuters) – The head of the World Health Organization (WHO) on Tuesday cautioned against declaring victory too early in Congo’s Ebola epidemic, despite encouraging signs that it may be brought under control.

“The outbreak is stabilizing, but still the outbreak is not over,” WHO chief Tedros Adhanom Ghebreyesus told journalists on a visit to Democratic Republic of Congo’s capital Kinshasa.

“We are still at war, and we need to continue to strengthen our surveillance and … be very vigilant.”

WHO officials on Friday expressed cautious optimism that the epidemic of the deadly virus was stabilizing, partly owing to the swift deployment of vaccines.

But a day earlier, Congo’s health ministry reported its first confirmed case of Ebola in over a week, in the rural community of Iboko.

Ghebreyesus said 2,200 people had been vaccinated, and that case management and tracing contacts of victims had gone well.

But he said: “It’s not over until it is over. Even if one case crosses into Congo (Republic) and gets to an urban area, that could trigger another epidemic”.

The hemorrhagic fever has killed 27 people since the outbreak began in April, and there have been 62 cases, 38 of which were confirmed in a laboratory. A further 14 are probable Ebola cases, and 10 more people are suspected of having Ebola.

In contrast to past Ebola outbreaks health workers have moved quickly to halt Congo’s latest epidemic. Ebola killed at least 11,300 people in 2013-16 in West Africa and during that outbreak WHO was criticized for not taking it seriously enough in its early stages.